When my book club discussed what we should read this year, I put Flanner O’Connor on the list. I’ve heard her name mentioned as a great writer since my English major days, and as a Catholic writer since my conversion. We decided to tackle her short stories, since some of us hadn’t finished the last two novels we’d picked. Flannery O’Connor is also better known for her thirty-one short stories than her two novels. My Initial Reactions to Flannery O’Connor

I first encountered Flannery O’Connor in a university English course decades ago. We discussed “A Good Man is Hard to Find,” and I found it… difficult. I couldn’t understand why people loved Flannery O’Connor. Yet I knew that I needed to give Flannery a second chance, because I’ve encountered other writing that I disliked on the first read and then came to love later (Wuthering Heights springs to mind). 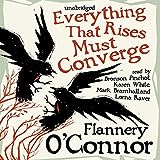 I downloaded Everything That Rises Must Converge from my library and began listening while putting Joey to bed. (A voice in the room is just white noise to him, and gave me something to think about while laying with him, waiting for him to settle down and fall asleep.) To be honest, I found these stories just as difficult as “A Good Man Is Hard to Find.” It’s not much of a spoiler to say that someone dies at the end of nearly every Flannery O’Connor story.

My friends found Flannery just as difficult. One of them texted me to say, “I’m having troubles with dear Flannery. Are there any stories that are slightly less violent?” I suggested that she read “Parker’s Back” and “The Enduring Chill,” as those two stories have no deaths in them, and that she stay away from “A View of the Woods,” as I’d found it particularly disturbing. And so the question still hung in my mind: why is Flannery revered as such a great writer?

So I sought out Flannery O’Connor fans, and found them in Bishop Robert Barron and the hosts of the Close Reads podcast.

I haven’t yet read all thirty-one of Flannery’s stories, but I’m working on them. The more I read, the more I’m intrigued. Despite the violence or darkness in the stories, Flannery creates unique and thought-provoking characters. I do recommend reading any introduction to the stories, or finding some commentary on the story. I’ve been reading a story and then looking up the Close Reads podcast episodes for that story—although they’ve only discussed the eight stories in Everything That Rises Must Converge.

Many of the stories have a mother-son theme. “Everything that Rises Must Converge” is about Julian taking his mother via bus to her YWCA reducing class. He disagrees with how she treats black people and, when a black woman gets on the bus wearing the exact same hat as his mother, he hopes she’ll learn a lesson. “The Enduring Chill” is about a young man returning home to die (as he thinks), and blaming his mother for his lack of artistic talents. “A Good Man is Hard to Find” is about a grandmother going on vacation with her son and his family.

If these stories are in fact the work of a young lady, they are indeed remarkable. ~ Evelyn Waugh

Most of her stories also deal with the topic of race or position in society. Flannery O’Connor wrote about the American south, and as a Canadian, I found some of these attitudes hard to understand. In “Revelation,” one woman debates whether she’d rather be a Negro or “white trash” (if she wasn’t born white and, in her mind, superior). While reading Flannery, I also read The Last Blue (a novel about the blue-skinned people of Kentucky) and watched To Kill a Mockingbird with my husband. It’s been interesting to consider the theme of race and prejudice in all these stories.

Flannery’s descriptions are superb. She has a way with words that makes it easy to picture characters, setting, actions. For example,

Parker lunged into the midst of them and like a whirlwind on a summer’s day there began fight that raged amid overturned tables and swinging fists until two of them grabbed him and ran to the door with him and threw him out. Then a calm descended on the pool hall as nerve shattering as if the long barnlike room were the ship from which Jonah had been cast into the sea. ~ “Parker’s Back”

How many writers can start and end a bar fight in two sentences, and throw in a metaphor to boot?

Each story also draws the reader very quickly into the head of the narrator, whether that narrator is the chatty grandmother in “A Good Man in Hard to Find” or the morose wanna-be artist in “The Enduring Chill.” The stories are told from a third-person perspective, but we are very close to that person, seeing their thoughts and motivations and their outlook on those around them. Perhaps that is what I most enjoyed about these stories—getting into the head of another person, even if that person’s actions—or the results of their actions—are shockingly violent.

Flannery “explained the prevalence of brutality in her stories by noting that violence ‘is strangely capable of returning my characters to reality and preparing them to accept their moment of grace'” (Encyclopedia Britannica). The Close Reads podcast hosts talk about this moment of grace, and when it appears in each story, and whether the characters recognize or accept it. Bishop Barron also brings up this “moment of grace” in every Flannery story.

One of Flannery’s admirers was Thomas Merton, who became more of a fan with each new book of hers. Over the years I came to see how much the two had in common—a highly developed sense of comedy, deep faith, great intelligence. The aura of aloneness surrounding each of them was not an accident. It was their metier, in which they refined and deepened their very different talents in a short span of time. They both died at the height of their powers. ~Robert Giroux, introduction, The Complete Stories

I highly recommend looking up Bishop Robert Barron’s episode about Flannery O’Connor in his Pivotal Players series. We were able to catch it for free during some covid specials, and I appreciated Bishop Barron’s insight into Flannery’s life and stories. Often, learning more about an author’s life helps me see their stories or novels in a new way, and this was true for Flannery.

Flannery O’Connor was born in 1925 in Savannah, Georgia. She grew up in a prominent Roman Catholic family. When she was a teen, her father’s lupus forced the family to relocate to rural Milledgeville. Flannery graduated from Georgia State College for Women in 1945 and then studied creative writing at the University of Iowa Writers’ Workshop. Her first short story, “The Geranium,” was published in 1946.

Flannery inherited her father’s lupus and had to move home herself. She raised peacocks and wrote. According to Erin McDade, she was intensely sassy, badass, and witty. She died in 1964 from a lupus flair.

Have you read Flannery O’Connor’s novels or short stories? What do you think of them?

Check out our other Catholic book club selections: