Last night I took the girls to see Dora the Explorer “in person” at the Save-on-Foods Memorial Centre.  They were, ironically, watching Diego when I got the email saying we had tickets to the event.  I turned off their show as it ended and, when they asked to watch another, said we had to eat supper and catch the bus because, guess what?  We were going to see Dora live, just like we saw Huckle Cat last year.  Their eyes got big with excitement. 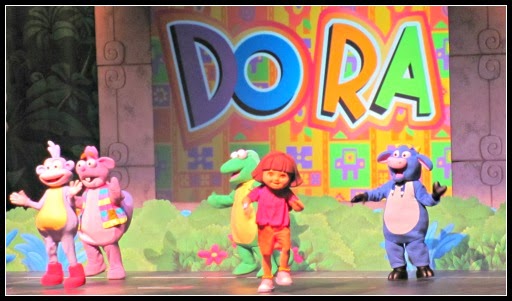 They chattered excitedly through supper and getting their shoes and goes on and all the way to the bus.  Halfway to the arena, another little boy got on the bus clutching a huge stuffed Boots.  The girls told him they were going to see Dora too and that they would push the button when we had to get off.  As we got closer to the arena, we saw more and more children their ages heading there with their parents.  It was fun to see the crowd streaming through the doors with plenty of Dora backpacks and dolls and other souvenirs.

We made it there fifteen minutes early and found our seats.  A big stage was set up in the middle of the arena with a screen showing Dora’s name.  Then began the waiting… Some music was playing, to which the girls danced for a bit, but I was disappointed that the music switched from some kid-friendly songs when we got there to some pop songs before the show began.  I thought they could have kept it to kids’ tunes for the audience.

Swiper did a run across the stage, which had all the kids shouting and pointing, and for a while the girls sat quietly, watching attentively for another appearance, but we had to wait a while longer before the show finally began.  One mom commented I was brave to bring three kids to a concert and offered to help if needed, but I kinda laughed—our girls have been to a lot of movies and I was confident they’d be totally engrossed in the show and well-behaved.  (I was right.  Even Jade was having fun watching until she fell asleep.)

The show introduced Dora, Boots and several of their friends (whom my daughters knew, of course, but I didn’t—I think that evening was the most Dora I’ve ever sat through).  I enjoyed watching the actor who held up Map.  Diego and Baby Jaguar came in just after the intermission; the girls had been asking me on the way there if Diego would be part of the show and assuring me that wherever Diego went, Baby Jaguar went too.  Baby Jaguar (and a few other animals) were helped out by actors in black like Map, and again I thought their dances were rather cool. 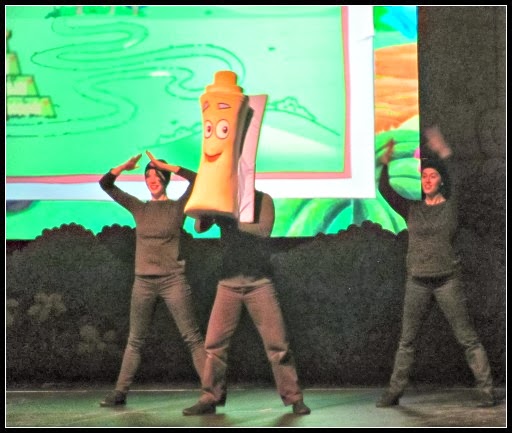 The show was about Dora’s search for her lost teddy bear, which I’m sure we’ve seen on DVD, but the girls still enjoyed watching it play out in real life—just as I also enjoy watching shows I’ve seen before come to life on the stage.  My husband and I are huge theatre fans, so I thought it was great to have the chance to introduce the girls to live theatre in a way that they could appreciate it.  Sunshine was disappointed that they didn’t get a chance to go up on stage and meet Dora, but she and Lily had fun waving, shouting, and dancing as Dora requested, just as they do when watching a Dora DVD. 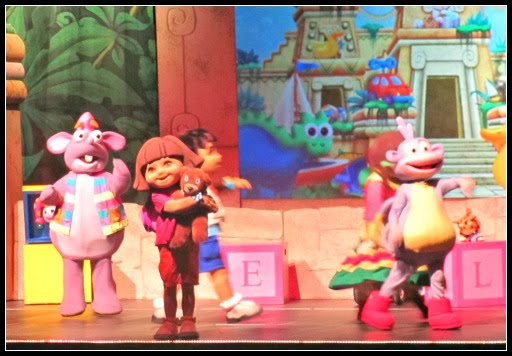 When the show finished, we joined the crowd streaming away from the arena and made our way to the bus stop.  One lady walking past soon caught on to the fact that most of the kids on the street had just been to a Dora show and began asking everyone about the show and if they’d enjoyed it.  Unfortunately, the evening didn’t end totally perfectly, as I managed to get onto a bus going the wrong way.  (Apparently I didn’t learn anything from Dora about reading maps and asking for help.)  So we spent an extra hour on the bus riding around the city, while the girls watched people get on and off and attempted to get comfortable on their plush seats.

As we left the show, Sunshine asked when Dora would be back again and if we can go next time she comes to town.  They were definitely super excited to see one of their favourite movie characters “in real life” and it was fun for me to see their excitement.  It was also neat to see all the other families at the event, like the dad wearing a purple Dora backpack while helping his daughter find their seats.  If Dora comes to town again, we’d definitely try to get tickets again.

Dora is currently on tour across Canada; to find a show near you, check out the website. 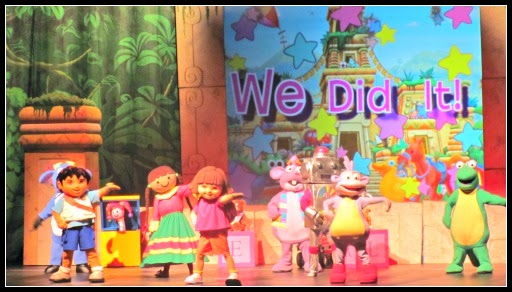 I received complimentary tickets to the show in exchange for my honest review; all opinions expressed are my own.