Fuel fumes filled my nose as the seaplane taxied slowly across the water.  In the time it took me to boot up my Netbook, the pilot steered us through Victoria’s inner harbour.  Just as I began typing, he turned the corner and picked up speed.  Instead of the bump of water beneath the floats, I felt the lift of wind beneath our wings.  We soared over the lighthouse at the end of the breakwater and I realized that the white dots below us were seagulls gliding above the blue-green waves.

“I’d like to promise it’ll be smooth,” the pilot had told us after giving us the usual information about where life jackets were located.  “But it won’t be.  It was rough coming here.”  He had just flown in from Seattle and was now taking us back there.

The earplugs expanding slowly to fill my ears didn’t cut out the sound of the seaplane’s engines.  There were seven of us on the ten-passenger float plane.  One young man, flying by himself, took the co-pilot’s seat.  I wondered if, like in a vehicle, I’d be less prone to motion sickness with a forward view.  Straight below my window, the waves looked like greenish linoleum; at the horizon, they melded into a smooth blue expanse with no separation between sea and sky.

Gusts of wind sent the seaplane bouncing unpredictably.  I thought of my daughters shrieking with glee as I bounced them on my knees and wondered why it was so delightful.  My stomach sent signals that it didn’t like this bouncing either.  I focused on the horizon, the boat in the distance, the gauges and switches I could see through the doorway into the cockpit.  Why was the seaplane so warm?  I stripped off my vest, then my sweater.  Then I closed my Netbook and put it away.

Twenty minutes into the flight, land appeared below us again—first a rocky cliff plunging down into a line of white waves with curves of the rock showing where the water had carved out this cliff and trees daringly clinging to patches of dirt.  Houses appeared as squares in larger squares of lawn or fields cut from the dark evergreens of forest.  Reds and yellows of deciduous trees dotted the greens.  All very pretty, except that my head still felt hot and my stomach was complaining about the mocha I’d had just before takeoff. I cast covert glances at my fellow passengers.  The man beside me stared straight ahead, his face as serious as his black business suit, despite the orange earplugs sticking from his ears.  The lady two seats in front of me leaned against her window, occasionally tossing comments across the aisle to her friend or pointing out the scenery below.  Behind me, an older lady typed at her laptop or took notes on a scrap of paper.  I envied her; I’d planned to spend this hour of travel working on critiques for my class or having some uninterrupted writing time.

I peered down at the scenery below, hoping desperately this was Lake Union we were flying over now and we’d soon be landing.  But as the water stretched on, zigzagging back and forth among boats and buildings and tree-lined coasts, I realized we were just following Puget Sound.  My stomach revolted at the idea of more flying.  I clamped my teeth together and reached into the pocket in front of me.  A blue envelope had something about “motion sickness” on it and a white baggy inside.  So much for what my fellow passengers might think of me—I opened the bag and let my stomach do what it wanted to do.

The plane continued bumping up the coast as I held my baggy like a best friend.  I pulled my earplugs out and found that, despite the noise, my head felt better with my ears clear.  Breathing deeply, I watched the scenery pass below and wished for land.  Next time, I thought, I’ll take the ferry—at least if I get motion sick there, I can step outside for some cold, fresh air to clear my head.

Then the seaplane dropped towards Lake Union and began bouncing across the water, but the waves felt solid and good underneath the floats compared to the weightless bouncing we’d done up in the sky. 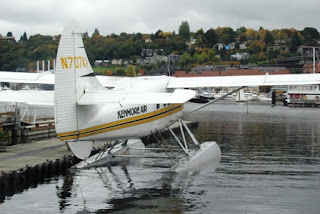 We walked off the seaplane together and took turns handing our passports to the customs’ officer. Then I found a garbage in which to deposit my baggy and stepped out into a cold, rainy Seattle afternoon.  Never have I been so happy to walk in the rain.

I spent the weekend at Women of Faith dreading the flight back to Victoria and praying for a smoother ride.  I didn’t eat lunch before getting on the plane; I didn’t read or get out my Netbook; and perhaps that, along with the nicer weather, helped me fly home without problem.

Some things are better small, but some things—like ferries and planes—are better big.