Our experience with elephants has been limited to smelly encounters at local zoos. Much as we love our zoos, these majestic animals are hardly at their best there. I was excited to watch Phoenix Wilder: and the Great Elephant Adventure just to see elephants in their natural environment. This family-friendly movie didn’t disappoint, in either the story or the elephant encounters! I watched this movie for free and received compensation for this post, but all opinions expressed are my own.

Phoenix Wilder: and the Great Elephant Adventure drew us in from the first scenes. After his parents’ death, 13-year-old Phoenix travels from North America to Africa to live with his aunt and uncle. On his second day there, he goes on a mini safari with his uncle. During the lunch break, Phoenix wanders away from the group and gets lost.

As his aunt and uncle initiate a search for Phoenix, he runs into a local, friendly elephant. The elephant keeps wandering back to a local poacher’s camp, where his mate and baby are kept captive. Phoenix is horrified by what the poachers are doing. He manages to disrupt the poachers’ work, but that also turns the poacher’s attention to him—and the elephant who is helping him. My Thoughts on Phoenix Wilder: and the Great Elephant Adventure

I watched the trailer several times before watching this movie with my girls. I was worried some of the scenes with the poachers would be a bit scary, but I was quite pleased that this a very family-friendly movie. While the poachers have guns, very little shooting actually happens in the movie. The head poacher is very grouchy and makes a great bad guy, but doesn’t use bad language or horrible threats.

Like Phoenix, the girls were immediately invested in the plight of the elephants. They caught on very quickly that it’s a tragedy that so many elephants are being killed just for their ivory. Sunshine compared this to the way the North American bison was killed by white hunters for its hide in the 1800s.

Lily (age 7) thought it was neat that Phoenix got to actually train the elephant. She says it was a really cool movie. She thinks people should stop poaching elephants. Elephants are nice and poaching is mean.

Sunshine (age 10) also thought it was cool, because it had real elephants. She liked the way {spoiler alert} one of the Africans stopped his boss from shooting the elephant. (The movie clearly portrayed “good guys vs. bad guys,” but there were a couple characters who were in the middle and eventually chose to do the right thing.) She thinks better grazing land should be reserved for elephants. 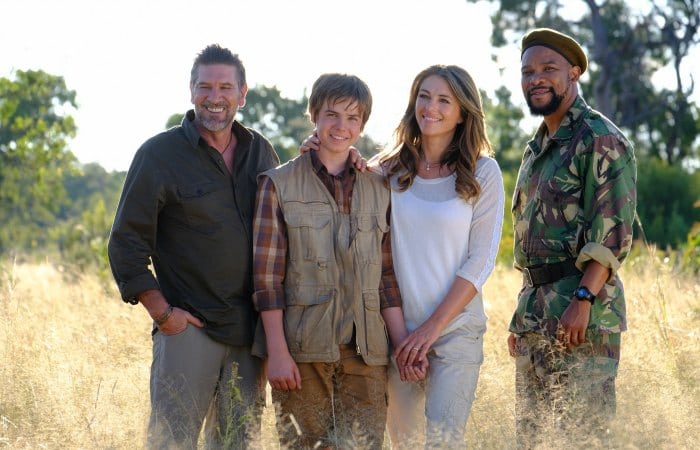 I liked the way this movie gave us a wider perspective on our world. It’s too easy to get caught up in our own little lives and ignore things that are happening on the other side of the world. We may feel like we can do nothing about elephant poaching in Africa or the sale of ivory in Canada.

Phoenix Wilder: and the Great Elephant Adventure is a great way to start a discussion with your kids about the amazing animals God has created, why poaching is wrong, and wildlife conservation. Kids have unique ideas and a “can-do” attitude that many of us adults lack. Your children may surprise you with their reactions to Phoenix’s story!

This would be a great movie to watch if you’re doing a homeschool science unit on elephants or a geography unit on Africa. The girls definitely had some questions about elephants, Africa and poaching when we’d finished watching. If you’re not homeschooling, it’s a great family movie. Phoenix has a fun adventure that will keep your entire family on the edge of their seats—and cheering when it all ends.

More about Phoenix Wilder: and the Great Elephant Adventure

April 16th is World Elephant Day and release day for Phoenix Wilder: and the Great Elephant Adventure. The movie stars Elizabeth Hurley as Aunt Sarah and is from the director of the Against the Wild films.

Before the film, viewers get to see an interview with the elephant trainer from the movie. Sunshine enjoyed learning more about elephants and their plight in Africa. I couldn’t believe that mama elephants are pregnant for nearly two years!

Drop by the website to find out more about Phoenix Wilder: and the Great Elephant Adventure and where it’s playing. You can also check out the trailer on Vimeo:

Win tickets to see Phoenix Wilder: and the Great Elephant Adventure in theatres!

Enter to win a pack of 5 passes to see Phoenix Wilder: and the Great Elephant Adventure at a theatre near you! Just use the giveaway form below to enter. Contest ends on March 28th, 2018. Good luck!

Do your kids like elephants? How do you discuss wildlife conservation with them?