I found it a bit amusing that my Writing 100 drama professor at UVic required us to attend a play for class. The very first play I saw was for my introductory drama class during my first degree, eight years ago. I went with a friend of mine to a Vern Thiessen play about World War II (funny that I can remember the playwright’s name and not the play’s name) and got hooked on theatre.

In the spring, I bought the student subscription for the upcoming theatre season… just before my husband (then “just a friend”) did the same thing. We waved to each other during shows, or said hello and introduced our respective dates (I always brought a girlfriend; so did he, leaving me wondering if he was dating any of them or “just friends” like we were).

The next year, I wasn’t very impressed with the theatre’s lineup of plays, so I wasn’t going to renew my subscription. Then he emailed me in Australia, saying that the theatre was offering him a six-pack; did I want to share it? There were three plays I did want to see, so I said sure. Then I shook my head for agreeing to three “dates” with a guy I was “just friends” with.

As it turned out, we started dating officially before we saw any of those plays. In December, we even convinced my twin brother to come along to the theatre for his very first play—A Christmas Carol. We learned about rush tickets and attended fringe festivals and even an opera and continued to enjoy theatre together. 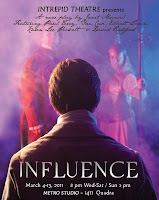 Last week, we attended a new Janet Munsil play together. I found myself viewing the play differently, now that I had a bit more information about writing a play—much as I’ve found myself becoming a more critical fiction reader with the more that I learn about fiction.

For example, stage plays are mostly dialogue—what the actors have to say to each other. What they do while saying that is largely determined by the actors and the director, with a few “stage directions” from the playwright. (This is why Shakespeare’s plays are sometimes hard to read; we’re used to more exposition around the dialogue to help us understand the dialogue).

During the play, Munsil poked a bit of fun at the art of theatre. Haydon, one of the main characters and an artist, accused another character (whom he thought was a famous actress) that her work wasn’t really art. How could it be, when it didn’t last? For a day, for a week, her work was there—then it was gone. Another actress, in another place or another time, might recreate the playwright’s words… but the magic created by that actress (or actor) is short-lived.

Modern technology, of course, has enabled us to capture the work of actors and actresses for future generations and wider audiences. Movies may “last” longer than theatre, but I wouldn’t say that makes them more “art” than theatre is.

So must art be something that lasts? Or is it enough that it leaves an impression upon a person, such as that very first play I attended, which has brought me back to theatres again and again?

For more about other things that plays have made me think about, check out my reflections on Jitters and 2 Pianos 4 Hands.