Sunshine turned ten last month and we celebrated with a party at our local pool. After all the themed parties we’ve thrown for the past several years, we didn’t have any theme ideas this year. There haven’t been any movies like Tangled or Frozen that we’ve gone crazy about. Sunshine and her guests had fun with this simple pool party, and so did I. (It’s hard to believe Sunshine is turning double digits already! It seems like yesterday that she was turning 5 and now she’s twice as hold already! Despite that, she’s still my bright, curious, fashionable, social, busy little girl!)

We started with our local recreation centre to see what dates were available for a pool party. Unfortunately, we were super busy for Sunshine’s actual birthday weekend, and the swimming pool was booked for that day. We ended up having her party a week early.

Once we’d picked the dates, reservation was easy. I booked the party online, after browsing the program guide and  website. The day before the party, I got a call from the rec centre, confirming our party and giving me more details about when we could set up and such.

With the venue booked, Sunshine and I moved onto other details. She made her guest list. We had to make sure all her friends were over seven and could swim reasonably well. Because her party was less than two weeks away, I emailed the moms, rather than trying to print and mail or deliver invitations. That also let me chat with the moms about their daughters’ swim abilities.

Sunshine decided she wanted a strawberry cake, so I popped onto Pinterest for ideas. This Homemade Strawberry Cake recipe caught my attention. We managed to find all the ingredients except for freeze-dried strawberries, and I made it a couple days before Sunshine’s party. My icing looked a little chunkier than the recipe’s, but it was still scrumptious. 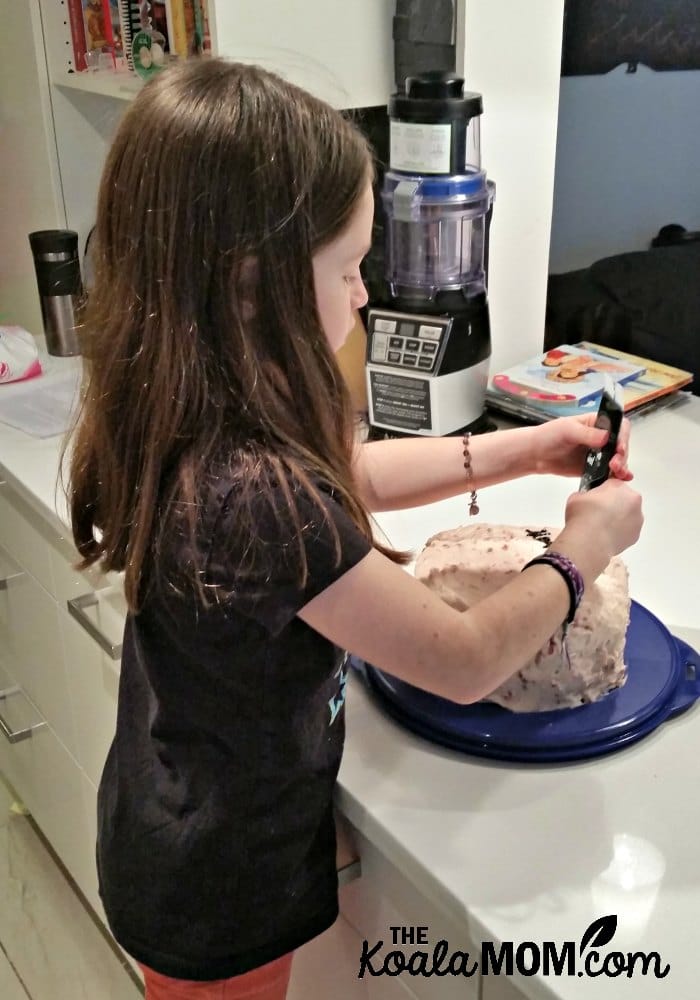 My aunt gave us some pinatas back in the summer, so Sunshine chose one and we bought candy for it. The morning of her party found her stuffing the pinata while I iced the cake. I packed everything we needed for the party into a few bags. Then we headed over to the rec centre. The party room overlooked the pool and the front door, letting me watch for guests as they arrived and then watch the girls play during the party.

We had the assistance of a staff member for the duration of the pool party. She helped us set up the tables and chairs. Then she led the girls in various games in the pool for an hour. Jade, Pearl and Joey (too young to swim by themselves) hung out with me in the party room, playing with a couple balloons.

While the girls played in the swimming pool, I set up the party room for snacks and visited with a couple moms who’d stayed. I picked up pink paper plates and cups and plastic cutlery at the dollar store. My husband found the adorable paper lanterns at the dollar store. We used them for decor during the party, then let each of the girls pick a lantern to take home with them. Some of the girls tied the lanterns to their balloons to keep their balloons from floating away.

I kept the party snacks simple, as the party was mid-afternoon. We had a fruit tray, some pretzels, vanilla wafers, zucchini chocolate chip mini muffins, fruit punch, and the strawberry birthday cake. Swimming made the girls hungry, as the snacks disappeared pretty quickly!

After their snacks, the girls decorated little bags in which to put the candy from the pinata. I put a piece of cardstock in each bag to keep the Sharpie from leaking through to the other side. I mostly wanted each girl to put her name on a bag, so they didn’t get their bags mixed up with each other. We moved tables out of the way for the pinata, which my husband held up on a broom stick. In a few swacks, it was broken up and the kids had grabbed their candy. They then began an unplanned game—candy trading! I laughed to see them all huddled in a circle, asking how many caramels they could trade for a Starburst.

Then it was time to clean up, as we had to be out of the party room at a specific time. I quickly repacked my bags, tossed the garbage and recycling into nearby bins, and herded the guests into the lobby. The kids were reluctant to break up the party, of course, but I was happy to have an ending time. At home, it was easy to unpack my bags and put them away—much easier than cleaning my whole house again after a party!

Overall, having a party at our local rec centre was easy and fun. It was also reasonably affordable compared to other party venues around Vancouver. I’d recommend checking out your local recreation centre for your child’s next party.

Have you ever done a pool party? What worked for you?