Our letter fun continued this week with the letter L plus the letters M, N, O, and P. (And Sunshine would have started on Q on the weekend if I had let her).  Right now we are working more on letter recognition than actually writing the letters, as the girls are much more interested in the crafts than in printing. L is for leaf, so I had the girls gather a handful of leaves each outside.  I encouraged them to gather different shapes and sizes of leaves and then we talked about the different trees and bushes around our house.  I drew a large letter L on construction paper for them and they glued their leaves into the L.  Lily also drew some leaves, which surprised me by how well she did. 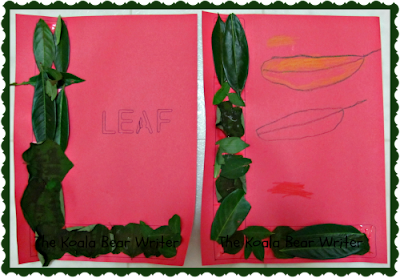 We also used the leaves and loonies to make crayon etchings in their notebooks.  Both girls needed help with this to keep the leaf or loonie from sliding around underneath the paper.  While they worked, they sang one of their favourite songs: “Magic Penny” (which starts “Love is something if you give it away…”).

The girls made a construction paper mouse.  I also had some music and mermaid stickers for them and I asked Sunshine to write a row of Mm’s and MERMAID before she could put her stickers on.  We listened to music while they worked.

They did some colouring in their Monsters Inc colouring book and we read When Miles Got Mad by Ruby’s Studio. N is for noodle, so I dyed some penne noodles red (their current favourite colour) and the girls strung them into two very long necklaces.  They had a lot of fun with this, as they like beading and dress-up.  I wrapped some tape around the end of their string to make it stiffer for threading the noodles on.  Then they used noodles to make an upper case and lower case N. I had some owl stickers for them, so again I had them each write a row of O’s and write OWL once and then they could put their owl stickers in their book.  Lily made nice, neat little OW and then a very large L and her O’s were quite creative, but she tried.  I made a big O in their book and they put the owls in a circle around the O.

What they really enjoyed doing, however, was two crafts I found on Pinterest.  The first was an octopus, which Lily had so much fun doing that she made two.  I got them each to trace their hands for the octopus’ tentacles.  Sunshine cut out part of her octopus and I helped Lily cut out hers.  Then they drew the faces and glued the octopuses together.

For the owl, I printed it off and ended up cutting it out for each of them so that they could glue it together (Lily glued hers into her notebook and Sunshine glued hers on a piece of paper).

We finished off the week by doing a lot of reading, because Sunshine came down with the flu.  The P books that I pulled off our shelves included Each Peach Pear Plum and Peepo by Janet Ahlberg, This Little Prayer of Mine by Anthony DeStefano, Little Copper Pennies by Susan Harris, Thank You Prayer by Josephine Page, and the Zonderkids Princess I-Can-Read Books.  I also had some princess stickers for them to put in their notebooks.

Have you worked on teaching your children the letter L and the rest of the alphabet?