One piece of marriage advice I’ve heard over and over again is to have a regular date night—a time just to relax and have fun as a couple. But once kids come along, date nights get more tricky. Spending time together doesn’t have to mean getting a babysitter and getting out of the house. One way my husband and I enjoy having fun together is to dig out a board game after the girls go to bed. Here are our favourite “date night at home” board games for two players. Making Time for Board Games as Parents…

When I started dating my husband, he taught me to play Scrabble. He thought it was very funny that a writer and English major like me had never played Scrabble before, but I caught on quickly. We played a lot while we were dating, and frequently talked his mom (and less frequently his dad) into joining us. Then Sunshine arrived… and Scrabble games (or any board games) became less frequent.

Now, we try to put the kids to bed before starting a board game. This gives both of us the best chance to focus on the game. If baby won’t go down, try putting him in his high chair with snacks or small toys while you play your game. An older child may be happy watching a TV show for half an hour while you play a shorter game together. Sometimes, you do what you have to do to get a bit of quality time together!

Our Favourite Two-player Board Games

The other night, we were talking about playing a board game and my husband said, “Pick something you think you can beat me at.” Hmmm, tall order, but I picked Backgammon.

I won one out of three games—I was a bit too tired to focus on strategy and, for the last game, followed a piece of advice which was more helpful to him than me. Backgammon has a nice combination of luck (rolling the dice) and strategy (which pieces to move). This is an old favourite two-player board game from our dating days. My family doesn’t like word games, so I’d never played Scrabble before meeting my hubby. In our ten-year-relationship, I’ve only beat him two or three times, but I have so much fun playing that I don’t mind (most of the time).

Now we have a very large Scrabble collection: Travel Scrabble, Deluxe Scrabble (with quadruple word scores!), Scrabble for Juniors, UpWords (3D Scrabble), and of course, the The Official Scrabble Players Dictionary (a must for settling disputes over words).

My in-laws play this two-player board game frequently, without keeping score. They just enjoy making words together. When they visit, my mother-in-law and I often play the same way. My husband prefers to make Scrabble into a math game by figuring out how to add up his letters to the most possible points.

Battleship is good for those nights when you’re a little bit tired, because it doesn’t require quite as much thinking as some other games. My husband and I each have different strategies for playing and, of course, there’s lots of chances to tease each other while contemplating where to shoot.

Plus, if you have small kids running around while you’re playing, the red and white pieces stick in the board so if the board gets bumped it’s not quite the same catastrophe as someone bumping your Scrabble board…

This is our latest favourite board game for two players. If you’re a fan of board games like Settlers and Puerto Rico, you’ll love San Juan. It’s a card-game version of Puerto Rico, but it takes only a minute to set up and can be played with two (or more) players. We can play a game in about an hour (or less), as the game wraps itself to its own conclusion at a certain point (usually just as you are feeling successful).

There, are of course, these classic board games for two players, which you might enjoy although I refuse to play them. My husband is the sort of guy who is figuring out his next five moves while I’m still trying to figure out my next move, so “checkmate” is inevitable pretty quickly. He’s started teaching Sunshine how to play Checkers, so maybe someday she’ll be able to give him a better challenge than I can. 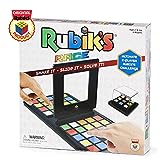 If you love Rubik’s Cube, you’ll also have fun with this game based on the classic puzzle. Rubik’s Race is a two-player board game that involves racing your opponent to make the pattern with your coloured tiles. You can either race to make a specific pattern of crosses or colours, or to make the random pattern in the shaker cube.

Ticket to Ride can also be played with two players and it’s a lot of fun. You draw cards to build railroads across Europe and, until the end of the game, don’t know exactly what your opponents are working towards (unless you’ve played the game often enough that you have all the routes memorized). You can get Ticket To Ride for either North America or Europe.

The Logo Board Game

Filled with astonishing facts, the Logo Board Game is all about logos and the things wrapped in them. It’s fun and easy to learn and will test your knowledge; just reach the winning zone to win. Find out who knows more about popular brands—you or your spouse!

Sushi Go is a fun, fast card game that can be played with two players. It requires little set up and each game takes only three rounds, so you can play it even if you just have twenty to thirty minutes together. Winning depends a bit upon the cards dealt and a bit upon which cards you choose to keep for your own hand. We had the basic card game and then bought the party pack, which lets you mix up the cards for more fun and variety.

Carcassonne is a board game that’s kinda like a puzzle too. You draw tiles from a bag to build a “map” of a medieval country. On each tile, you decide where to place your “person” (aka meeple) to get points at the end of the game. The map is different every time because you build it as you go. It’s also hard to know who is winning until the game wraps up and you count points.

Othello is a tile game that looks relatively simple. One player is black, one player is white, and your goal is to place your tiles in such a way that you can flip your opponent’s tile to your colour and have the most coloured tiles on the board. This board game for two players is another strategy game with plenty of possible outcomes. I enjoy figuring out my husband’s strategy and trying to beat him with it. It’s also quick and easy to set up, if you don’t have time to play a longer game.

My husband picked up this game a while ago and has been trying to teach me. It’s a strategy game that involves jumping your bugs around and over your opponents to trap their queen, without getting your own queen trapped. Hive is a strategy game similar to Chess or Checkers, but offers different ways to move your pieces.

Sheila from To Love Honour & Vacuum says Hive is her new favourite two-player board game. She says:

We really enjoy it! It’s kind of like chess, except it’s WAY easier to learn, and each game takes maybe 10 minutes. So we often play “best 2 out of 3” or “best 3 out of 5”, and that way it’s likely that each of us will win at least ONE game.

It’s also highly portable, so we sometimes take it down to our local pub for a game night date. We play a game while we’re waiting for the food, and then two games after, which is exactly what we did last week.

More Board Games for Two Players

Check out Sheila’s list of 20 Two Player Games to Play with Your Husband for more ideas! Plus, if your spouse or kids loves playing board games, check out this list of gift ideas for board game fans!

What are your favourite board games for two players?