Yesterday, we threw a (slightly belated) fourth birthday party for Sunshine.  It’s the first time we’ve done this; for her previous birthdays, we just had a small dinner with family or friends (though neither my husband nor I can remember what we did for her second birthday—my excuse is that I was working full-time then and six months pregnant).

Last year, Sunshine attended several friends’ birthday parties, so this year she had specific expectations for her birthday (including snow, like last year, which unfortunately didn’t happen).

A few weeks before her fourth birthday party, I saw a picture of some cake pops on Pinterest that made me think, “Hey, I could make those for Sunshine’s party!”  She loves the cake pops at Starbucks (I think it’s mostly about how they look—doesn’t everyone want to eat that cute little pink ball?).

One of her friends is vegan, so I googled vegan cake pops and found this recipe (with pictures and detailed instructions) at Veronica’s Cornucopia.  Netbooks can be very handy in the kitchen: On Friday, Sunshine and I baked this lovely chocolate cake: On Saturday, we turned that cake into fine crumbs, mixed the frosting right into the cake, and then rolled it all up into little balls: Then I blogged and checked my email while the cake pop balls sat in the fridge.  When they were hard enough, Sunshine helped me dip sticks into chocolate before I stuck them into the balls: On Sunday, we blew up balloons and sliced up pineapple, watermelon and kiwi for snacks and decorated the dining room for Sunshine’s fourth birthday party.  Four of Sunshine’s little friends arrived and Sunshine showed them around the house and got out toys for them.

My husband and I tried arranging a few games for them, with balloons and music and these cute beanbag frogs: 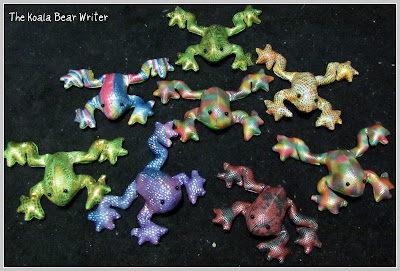 A game of throw-the-frog-in-the-bucket worked for a little while, except that some children (including Sunshine) were a bit pushier and another child, who patiently waited his turn, would have never gotten it.  We soon found out that the kids just wanted to play (especially with the frogs) and we didn’t need to organize games, and so we left them to their own imaginations (once we let Sunshine open her presents, as she’d been begging to do since the first one walked in the door).

All in all, it was a fun fourth birthday party.  Sunshine now feels like she’s four (she had a hard time understanding why we didn’t have her party the same weekend as her birthday, but Mommy had too much homework in February to throw a birthday party together then).  She really enjoyed seeing her friends again, as she hasn’t seen several of them since classes (and preschool and daycare) started in September.

What special things have you done for a fourth birthday party?  What is your favourite party activity?