The busker stood on the edge of the main street through Alice Springs, holding a large cardboard sign that read “3 Jokes $1.”  His long blonde beard, bushy and falling halfway down his chest, partly hid his cheery smile.  The rest of his head was bald, as if his hair had all fallen off the top and landed on the bottom.  A baseball cap shaded his face from the hot sun but couldn’t dim the bright twinkle in his eyes.

I sat inside the restaurant across the street as two girls walked up to him.  He bobbed his shoulders in a comical way as they approached, and then, as they passed him something, began waving his hands around while still holding his sign.  One of the girls burst out laughing and the other grinned.  They stood there for some five minutes while he did most of the talking.  I wished I could eavesdrop.

Down the street from there, a few days earlier I had passed another man busking in more conventional style.  His deep voice could be heard from a block away as he crooned a country ballad and strummed a guitar.  His black skin and curly hair seemed out of keeping with this white cowboy image, but his voice made up for the incongruity.  His guitar case sat open on the ground in front of his sandal-clad feet, a few coins scattered inside.  He watched his fingers rather than the passing people.

Like the man telling jokes, most people passed this man by without a glance in his direction.  Unlike the joke teller, the passers-by could enjoy this busker’s talent without having to pay for a demonstration of it.

On another evening, I walked by the harbour in Sydney and heard a sweet soprano voice drifting on the cool night air.  The singer was harder to find, standing in the shadows between two lamp poles.  Behind her, street lights reflected on the dark water.  At this hour, the harbour was quiet and there were few people to appreciate her talent.  Her long blonde hair was pulled back into a braid, and she wore white jeans and a pale shirt.  There was no guitar case in front of her; she stood there with just herself and her instruments, playing for sole enjoyment—whether hers or the passers-by. 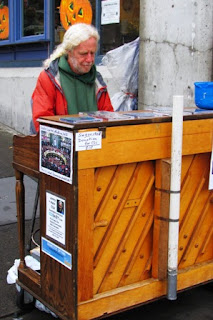 Those buskers stood out to me as I traveled in Australia.  More recently, I walked up to the library here in Victoria with my daughters.  In the open, airy courtyard, a man sat strumming the dobro guitar and singing Gordon Lightfoot songs.  When he saw the girls, he started playing “She’ll Be Coming Round the Mountain.”

We had a few spare minutes before meeting my husband after work and I had a frappucino to finish before we entered the library, so we sat down on a stone bench to listen to this personal concert.  As he played “If You’re Happy and You Know It” and the ABC song, I dug through my wallet for some change.  Passing the loonie to Sunshine, I told her to run over and drop it in his black guitar case.

I have often passed by buskers without acknowledging their music or even their presence.  Yet I’ve come to realize that they make our cities a nicer place.  There’s something delightfully surprising about coming around a crowded corner at the Calgary Stampede to find a man in full Scottish dress playing his bagpipes or walking the harbour here in Victoria while Darth Vader saws away at his violin.  Now, if I see a busker, I smile and nod and if I have time, try to find some change in appreciation for their music.

Addendum: At the Seattle Pike Place Market on Sunday (two days after I wrote this post), I found a busker playing piano.  He played beautifully, but it was the sight of his cute little piano sitting on a busy street corner that made me almost laugh.