On our annual trip to Alberta this summer to visit family, we stopped in Jasper for one night. During university and for a few years afterward, I went to Jasper every spring with my girlfriends for a weekend getaway. It was fun to come back with my children to see all the old familiar places (and a few new things). We stayed at a hotel on the north side of town, spent the evening swimming, grabbed breakfast at Papa Georges (a Jasper landmark), and then headed out to hike Maligne Canyon. As I’d booked our night in Jasper, I’d debated which trail to hike with the kids. There’s some nice easy walks right around the townsite that my girlfriends and I enjoyed, but I thought the kids might want a bit more scenery.

There’s more scenic hikes like Athabasca Falls, but those are further from Jasper, and I didn’t want to add more hours in the vehicle to our trip.

Riding the gondola up the Whistlers was out of my budget. The hike up is a good three hours for adults, much less my meandering children. And when we arrived, we found  Jasper was socked in with smoke from the forest fires in central BC, which ruled out most of the scenic viewpoint hikes.

Maligne Canyon is just a few minutes from Jasper townsite, follows fairly close to the river (so no huge elevation gain), and offers waterfalls, rock formations and other spectacular scenery. I’ve hiked it a few times with my girlfriends because it’s low elevation makes it a great early-season hike. Depending on where you start, it can be a shorter or a longer hike.

Maligne Canyon is marked by its bridges. Sixth Bridge is located near where the Maligne River meets the Athabasca River, and First Bridge is located at the head of the canyon, where Maligne Lake Road crosses the river. The most scenic (and thus most popular and busy) area of the trail is around the First Bridge, which also has the biggest parking lot. As we were just hiking for the morning before continuing our drive towards Edmonton, I decided we’d start at Fifth Bridge and go upstream towards the head of the canyon.

Fifth Bridge is a huge suspension bridge across a wide, fast river. The parking lot here is small but we were there early enough to get a space and start our hike. Since we’d just had breakfast, I only packed a few snacks for Joey in his backpack (along with his diapers), and the girls helped carry some water bottles. I also had my Ergo in case Joey decided he didn’t want to walk, which he did about twenty minutes into our hike. The trail starts out by the river, then climbs slightly over the bluffs in the picture above, and returns down to follow the river. Most of the trail is narrow (about wide enough for two hikers). It winds through the trees with glimpses of the river and plenty of viewpoints at scenic spots. The Maligne River is joined along its length by numerous other rivers and springs. It’s water source is Replica Peak and other mountains further up the Maligne Valley, which drain their spring meltwater into Maligne Lake. From there the water flows into Medicine Lake and then goes underground before reappearing in various rivers and springs at Maligne Canyon. The lady waterfall was gorgeous, but the girls really got excited when they saw the first underground river spewing its water into Maligne River. There was simply a large hole just above the river, with gallons of water tumbling down to join the other river. A sign nearby briefly explained the underground drainage system from Medicine Lake to Maligne River. The most scenic part of the hike is between Fourth Bridge and First Bridge, where the river drops into the canyon. It’s mind-boggling to contemplate how the water carved the rocks around it to create this deep, narrow chasm. More waterfalls tumble into the river, and the river itself goes vaulting over several waterfalls. Railings and handrails along the canyon keep hikers safe. Fourth Bridge crosses Maligne Canyon just to give hikers a view of the river far below. The trail dead-ends on the other side of the bridge in front of a beige rock wall, perfect for a family picture if there aren’t too many other hikers on the bridge, craning their necks to get views of the canyon. As you look down at the teal-green water, you can feel the cool air from the depths of the dark canyon rising back up. At Third Bridge, the trail crosses the canyon to the other side. Here, the spray from the river hits you as you stand on the bridge. There’s a viewpoint of the canyon walls, now steep and beige and straight, in contrast to the curved grey walls of the canyon at Fourth Bridge. More signs explain some of the geological formations that you see as you hike the canyon (if you can convince your kids to slow down and learn something while they hike). 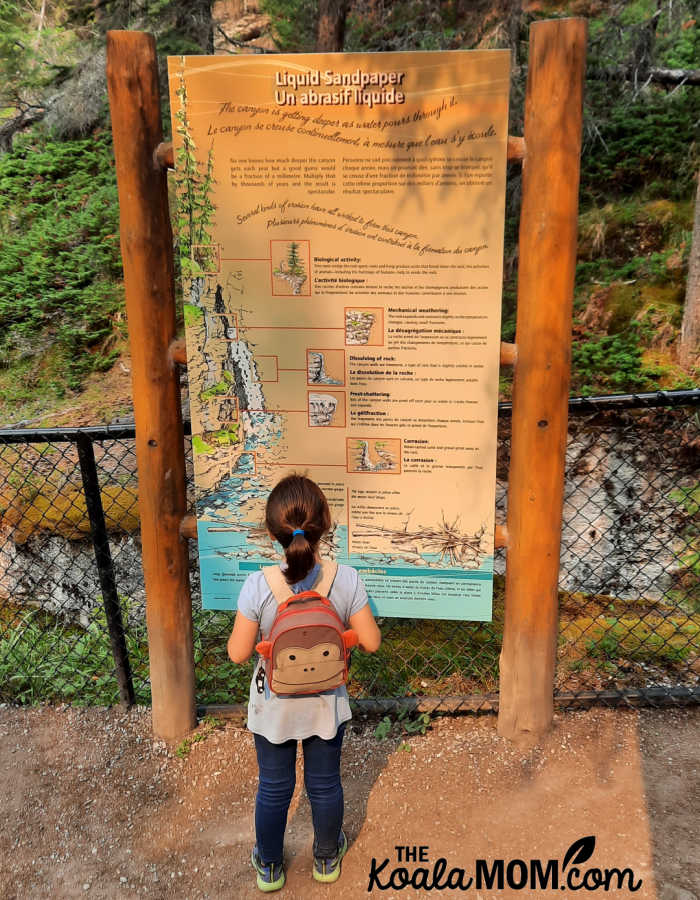 The most spectacular waterfall is at Second Bridge. Here the river plunges between its steep canyon walls. The rocks of the canyon walls show where the river was, thousands of years ago, before it carved itself deeper and deeper into the rock. Maligne Canyon is still getting deeper today, but the erosion now happens at a fraction of an inch per year. We checked out the next few viewpoints on the trail and then headed to the outhouses located by the First Bridge parking lot. There’s also a very nice tea house and gift shop here if you want to stop for a longer break. There are also apparently some fossils in the rocks around this area, but we didn’t see any. We refilled our water bottles at a water fountain and then started back down to Fifth Bridge. Although we’d seen the trail on the way up, I enjoyed hiking all the way back down and getting the chance to see the landmarks and waterfalls again. Hiking from First Bridge to Fifth Bridge was also more downhill, so the kids were going a bit faster. And I bribed Joey with the promise of a popsicle at the end of the trail if he walked the entire way himself, so he did (with a few reminders of the much-wanted popsicle). Maligne Canyon is one of the most popular, scenic hikes in Jasper National Park, with reason. It was hard to choose photos for this post to highlight the beauty of this trail, and I’ll just say that most of the photos don’t do the scenery justice. It’s hard to capture the sound of the waterfall, the feel of the spray on your face, or even for a small photo to show the sheer size and depth of the canyon.

There are parking lots at Sixth Bridge, Fifth Bridge, and First Bridge, so you can choose where to start your hike depending on your hiking part and your time constraints. The most scenic parts of the canyon are between First Bridge and Fourth Bridge, but the lower parts of the river are also beautiful.

There are quite a few stairs and narrow sections of the trail between First Bridge and Fourth Bridge, so this area is not suitable for wheelchairs or strollers. If you have small hikers, bring along a baby carrier instead of a stroller.

The hike from Sixth Bridge to Fifth Bridge is an easy, family-friendly hike that’s stroller accessible.

According to All Trails, the hike from Fifth Bridge to First Bridge and back is about four kilometers. We took a couple hours to hike this trail, but also spent plenty of time ogling the waterfalls, petting puppies, using the outhouses, and watching two kayakers shoot one of the cataracts just above Fifth Bridge. Despite the stairs near the top of the canyon, it’s an easy trail that could be hiked at a faster pace if you wanted.