Last weekend found me in Jasper with my girlfriends for our annual getaway. This year, seven girls in our group of eight were able to make it—only the second time we’ve achieved that number in the seven years we’ve been going. Three of my girlfriends picked me up at my mom’s place, where I was leaving Sunshine for the weekend, and we drove out around noon, while the other three girls came out after supper.
Catching up…

It was a good time to catch up on what’s happened to all of us in the last year. We had lots to celebrate: a permanent teaching contract signed, a master’s degree nearly finished, a wedding being planned. I also had news to share with them, and laughed at their guesses as to what it might be: I was pregnant again, my husband had a job, or I’d gotten into grad school. No to all three. We’d simply decided to move closer to family and find a job there, and so we had rented a place in a small town near my husband’s parents and my grandparents. On Friday afternoon, the four of us drove up to Maligne Lake and hiked around the lake, seeking a place that was cooler (shady and breezy) in the 32* heat. Only one of my friends had been there before, and so the rest of us enjoyed exploring somewhere new. We hiked and talked or simply hiked and enjoyed the silence of the mountains, the smell of hot evergreens, the clear blue water of the lake.

On Saturday, we went to Edith Cavell meadows—along with most everyone else in Jasper, it felt like—because the altitude and glacier would ensure that trail was cooler. There, I ran into an old homeschooling friend of mine. The wildflowers were out, as were some chipmunks 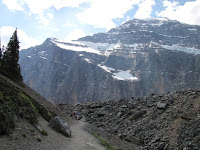 , and the glacier was as stunning as usual. From there, we went to a favourite spot, Athabasca Falls, for a picnic lunch. Several kayakers were portaging their way around the falls, and we watched them start down the river again, their little boats bobbing in the rushing water.

We spent the afternoon cooling off at the pool, despite the fact that only two in our group could swim. A game of “piggy in the middle” and the waterslide kept us busy. That evening, we ate out once again, and made our waiter run back and forth answering questions about canola and dairy allergies. In the end, he invited us to join him at a pub and we left him a big tip (but didn’t go to the pub). Instead, we went back to our B&B for a “trivia” game and found out how well we did—or didn’t—know each other.

Sunday found us getting up early (after a very late night of trivia) to head out to Pyramid Lake for some paddling. We rented two canoes for six of us and toured around the lake for half an hour. I haven’t been canoeing in about ten or fifteen years, so I enjoyed the chance to test my skills again and find out that I could still steer a canoe. We made it safely back to the dock and returned to our B&B to pack up. A walk around Annette Lake, another favourite spot, and a picnic there ended our trip.