Located about an hour east of Vancouver is a small Carmelite monastery. Tucked into the hill just off the highway, this monastery offers a place of quiet prayer. We recently visited to pray their outdoor Stations of the Cross with a group of fellow homeschoolers. Following a wide trail up the hill behind the monastery, we found fourteen beautiful bronze stations that invited us to pray and reflect on Jesus’ Passion. The Little Flower Monastery was built in 2015 by the Order of Discalced Carmelites. It’s located near the small community of Derouche, BC, just a few miles east of Mission. I was thankful for Google maps to guide us out there, because the last road into the monastery was narrow and windy, passing small farms and acreages and making me wonder if we’d gotten lost. Then, after another turn, there’s a sign for the monastery and a large, new parking lot.

We found parking near the monastery itself. A sign between two buildings indicates the beginning of the Stations of the Cross trail. Installed just a couple years ago, the outdoor Stations of the Cross provide another way for the Monastery to reach out to the community and spread their message of pray and meditation.

Outdoor Stations of the Cross

We followed the gravel trail around behind the monastery to begin our prayer. A generic hiking sign warns trail users about bears in the area. Keep going to find the first Station of the Cross, not much further. Each Station is indicated with a sign. The statues are about four feet high and sit on a rocky platform, making them eye-level for most adult viewers. We had eight or ten moms in our group, along with a herd of kids ages teen to infant. Ours was the only group there on Friday morning, so we were able to make our way up the trail at our own pace. The moms or older teens took turns leading each station and praying. Then we moved along to the next Station.

I was amazed at the detail of each Station. Although I was trying to keep track of my kids and follow along with the prayers, I found myself drawn to the faces of the statues. The artist depicted each person in such detail that it was easy to put myself in the scene. We’ve often prayed the Stations of the Cross in our parish, but something about the almost-life-size nature of these Stations made the readings even more real. 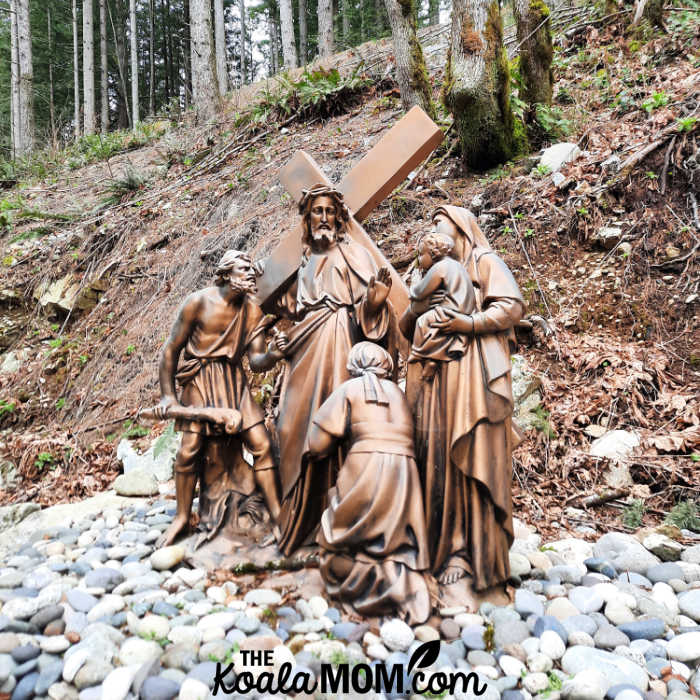 For younger kids, who have short attention spans, the outdoor Stations of the Cross let them run out some energy between each station. Joey collected sticks and rocks as we went along, but most of the other kids were at least listening. The Stations were spaced mostly evenly along the trail, which climbed steeply up the hill behind the monastery and then zigzagged back and forth between the stations. Eva Maria Richter, a secular Carmelite, told the BC Catholic, “It’s the real thing. It’s so inspiring. You meet Jesus on the way, up to the tomb. I didn’t realize it was such a big hill. It was very steep. When you are up, you have the view over all the regions, which I have never seen. It’s very beautiful.”

Although the trail is wide and clearly marked and gravel all the way up, it is steep in one part. As another mom in our group remarked, it really makes you think about Jesus walking up the hill to Calvary while carrying his heavy cross. I carried Joey for part of the trail and another mom pushed her infant in a stroller (until a teen boy offered to take over), yet our burdens were slight compared to Christ’s. The final Station, at the end of the trail, is an empty tomb. The kids loved popping in and out of the tomb. Then, when we finished praying, they took off down the hill. One thing I would have liked different about this outdoor Stations of the Cross was to have the trail be a loop so that we continued down the mountain. If there were another group there at the same time as us, I would have worried about interrupting their prayers as we walked back down the hill. The Little Flower Monastery is located about an hour and a half from downtown Vancouver. There is plenty of parking at the Monastery.

I recommend wearing sturdy running shoes or hiking boots for the trail. If you are bringing younger kids, put them in a carrier rather than a stroller. Although the trail is wide and flat enough for a stroller, it’s hard to push a stroller up the steep part.

Although the trail is steep, it was fairly short. I think our group took about an hour to pray the Stations of the Cross.

Bring your own Stations of the Cross to pray. None are provided by the monastery. The signs have only a brief description of each station (similar to a church).

We remained afterwards and had a picnic on a grassy spot near the parking lot. The monastery was quiet and we did say hello to Father D’Souza as he went back and forth. He also allowed us into the building to use the washrooms. However, I wouldn’t expect that the washrooms are open anytime you visit. We had already discussed running to the gas station down the road if anyone needed a washroom.

There is also a playground and sports field located just a few minutes from the monastery (you’ll drive past it on the road up). This would be another great place to gather after praying, if you go with a group of families or homeschoolers as we did.

For more about the Little Flower Monastery and other spiritual activities there, visit their website.

Praying the Stations of the Cross

For praying the stations of the Cross with younger kids, I highly recommend the Happy Saints Way of the Cross.

Holy Heroes also has quite a few Lenten resources for families, including an audio Stations of the Cross and a colouring book for kids.

Other Outdoor Stations of the Cross around Vancouver

Queen of All Saints School in Coquitlam has outdoor stations of the cross, drawn by children in the parish, set up around the school. These poster-board pictures were drawn in 2020, when covid first changed the way we celebrated Easter, and reinstalled in 2021. The first station is located at the back of the school, facing the playground, and the last station is near the front door.