Since the start of the pandemic, we’ve been playing more board games as a family. While we have a large stash of games, we’re always happy to try a new board game—especially one that promises some extra challenges! In a time when most of us would love to escape our homes, it seemed ironic to bring an Escape Room home. Escape Room the Game is a fun way to challenge your family (or friends) to get out alive—without leaving your house! I received this game for review courtesy of the publicist; all opinions expressed are my own. This post contains affiliate links; as an Amazon associate, I earn from qualifying purchases.

Escape Room the Game provides you with four fun escape rooms in one box. The game contains a “chrono” decoder and “keys” which you use in each escape. Then there are the separate clues and resources for each escape room theme:

Escape Room the Game works best with 3-5 players (it’s a team game where everyone works together). The box says it’s for ages 16+, but we successfully completed the first two games with our 12-year-old and 10-year-old and they both had fun with it. The next two games are supposed to be harder, so we’ll see if we’re able to escape again!

Each game has three parts. You need to solve each part and insert the right keys into the chrono decoder to move on to the next part. There are 8 hints to help you if you’re having troubles with the clues. The chrono decoder counts down as you play, beeping at intervals to let you know that time is passing, and playing slightly spooky sound effects to enhance the mood.

We started our Escape Room experience with a prison break. First, we gathered all our pieces: the chrono decoder, the hint decoder, the keys, and the prison break envelopes, along with some scrap paper and pens for making notes as we worked through the clues. The girls enjoyed taking turns reading the story on the back of each envelope. Then we opened the envelope and worked through the clues inside.

This really is a team game, where you need to be talking with each other about what you’ve figured out. When we did Prison Break, my husband was trying to let the girls figure it out for themselves and so he’d work through the clue and then say, “Your turn,” and pass it to them. We ended up frustrated. The game worked better as we learned to share clues and help each other. Even the girls spotted clues or had ideas that my husband and I hadn’t considered. Figuring out the right clue and putting the keys in the chrono was super exciting! Sunshine and Lily liked to plug in the keys together, and then we all waited to find out if we were right… a wrong code sounded a buzzer and decreased our time by 1 minute, while a right code gave us a chime. Then we were ready to open the next part and move on in our escape attempts.

We finished Prison Break with about five minutes to spare, with help from the hint cards. The last few clues were a bit confusing even to my husband and I. We looked up the walkthrough on the website to figure out what we’d done right or wrong (you need to enter a code from the game to access this). We’d had some hunches about certain clues that turned out to be right, so pay attention to your gut when playing this game! Sunshine wanted to start with this game, because she thought it was particular appropriate during a pandemic. The story does sound a little too close to real right now (hopefully the other Escape Room scenarios remain just fun games to play!). Feeling more confident after our successful prison break, we assembled our “lab” pieces. We did a much better job at talking through the game clues and sharing our ideas with this game. There were still times when all four of us were stumped, turning cards around in our hands without any idea how to figure out the clues. Usually, however, one little breakthrough would help us get to the rest of the clues. Sometimes, the clues were so obvious we’d overlooked them!!! (Even logos matter!) While playing this game, we learned an important trick: always make sure you have ALL the game pieces!!! We’d gotten through the first part and were completely stumped on the second part. We kept going around in circles but somehow managed (slightly over time) to figure out the clues. Once, I looked at the envelope to see if we had all the pieces and asked, “What’s the game board?” We didn’t know and we couldn’t see it, but we kept going.

Then, as we puzzled over the pieces to part three, I looked at the envelopes we’d already used and picked up a third piece of paper on the table. Unfolding it, I discovered the game board!!! We’d left out some valuable information in our search for clues! Once we had the game board, we were able to find the last of the clues to finish the game. However, because of our mistake, we finished about five minutes overtime.

Overall, we had a lot of fun playing Prison Break and Virus, and we’re looking forward to attempting Nuclear Countdown and Temple of the Aztec.

One thing I really liked about these games is the teamwork aspect. Most board games are every player for themselves. At times, we’ve had kids get upset over losing a game, or thinking they are losing a game. In Escape Room the Game, everyone is the winner—or everyone is the loser! You’re all in this together so whether you succeed or not depends on how well you can talk to each other and work through the clues. 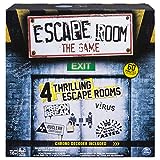 Jade (age 7) watched us play Prison Break but because she can’t read, she found most of the game confusing. When we played Virus, she and Pearl got out their own little game to play. Sunshine (12) and Lily (10) are both avid board game players and strong readers. They honestly contributed as much to solving the clues as my husband and I did. This game requires persistence, creativity, teamwork, and a willingness to tackle a big challenge.

We had four players for both Prison Break and Virus and that seemed like a good number. If your group is too big, it would be hard to share all the materials with each other and to all view the large game board together. I think it would also work with two players, if you and your spouse enjoy board games and want to tackle a challenge yourself. You’re not playing against anyone so you could even challenge yourself!

I think this would be a great game for families with teenagers. I’d like to have some friends over to tackle the game with us. It will definitely create some fun memories, whoever you play it with!

My husband’s only concern with the game is that once you’ve solved it, you’ve solved it. There are no variations on the game (beyond moving on to the next scenario in the box). I figure in a year or so we’ll have forgotten all the clues and answers, so we can probably play it again. However, this isn’t going to be a game that you’ll pull out every weekend to play again. 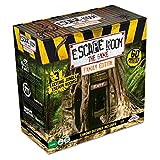 Drop by Escape Room the Game’s website for more information about their games, plus all the fun scenarios.

We tested out the base pack, but there are more games to play if you enjoy escaping! Escape Rooms II includes Secret Agent, Space Station and the Dentist. Escape Room for 2 players (date night idea!!!) has Kidnapped, Prison Island and Asylum. If your kids are Jumanji fans, there’s a Jumanji-themed Escape Room game.

Have you done an Escape Room? Would your family enjoy playing Escape Room the Game?