My dad was a farmer’s son and when I was growing up, he turned our almost-four acres into as much of a farm as he could.  We raised turkeys, chickens, ducks, geese, sheep and, in the summers, calves.  The sheep were my joy and responsibility, particularly when Dad decided that I could keep my ewe, Pixie, and breed her. 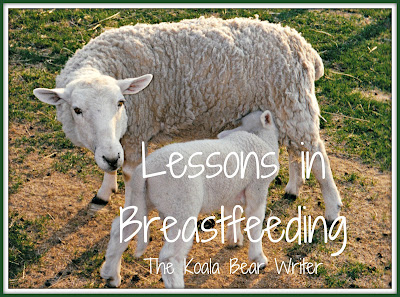 That spring, Pixie gave birth to her very first lamb in the early hours of the morning.  Dad woke me up to see the new lamb’s first weak attempts at walking and nursing.  I was amazed at how they both knew instinctively what to do—Pixie had never done this before yet she was a pro who needed no help from us, and the lamb was just a few minutes old and yet determined to eat something.

In the next years, I saw Pixie give birth to more of her lambs, including several sets of twins.  I learned to recognize the subtle symptoms that told me she was about to lamb; to stay out of the way while she paced and lay down and got up and pushed; and to take care of her while she took care of her lambs.  For her, nursing was easy; just stand there while the lambs helped themselves.

Perhaps it was from that perspective that I thought breastfeeding would be easy when it was my turn.  All of the women I had babysat for—who had also been my mentors in many ways—had breastfed their children and so I simply assumed I would do the same.  Yet when the midwife first passed Sunshine to me, and I cuddled her—wet and screaming—against my bare body, nursing wasn’t as easy as Pixie made it seem.

Later that night, as she wailed and I again struggled to get her latched, the frustration and exhaustion crept up on me.  “Stupid baby,” I muttered through tears.  My husband, waking up, came to rub my back and encourage me.  He couldn’t do anything more, just as I couldn’t help Pixie; but he could assure me that sooner or later, we’d figure it out.  And we did.  In a few weeks, nursing was a thing of ease.

With Lily, I knew to expect that initial learning curve.  It was easier to be patient with her, to keep trying until she was latched.  Even the first weeks of breastfeeding—when I had to sit in certain positions and hold her very carefully while she ate—were easier because I could look forward to the day when I could nurse her while laying down or when latching became a quick, discreet thing.

I have been lucky that this has been my only difficulty in breastfeeding.  I haven’t dealt with thrush or mastitis or any other issues (besides horrid engorgement, but that again goes away with time).  This week, women across the blogosphere are sharing their stories and advice in celebration of World Breastfeeding Week (check out #BreastfeedingWeek on Twitter).  I thought I would add my story—how I learned about breastfeeding.