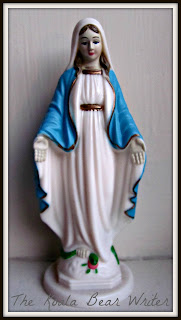 One of the Bible lessons I distinctly remember from my childhood was about the Virgin Mary.  My family attended a Lutheran church, but our homeschool curriculum was published by a Baptist denomination in the States.  In this particular lesson, our workbook outlined what the Catholic Church believed about Mary and why those beliefs were wrong.

When I started dating my husband, I also started attending Mass and reading the Catholic Catechism.  That old lesson stuck in my head; I had big questions about what the Church teaches about Jesus’ mother.  I expected we’d have some major debates about this, that this issue might be the breaking point in our relationship.  My mom even told me, at one point, “Don’t date that guy.  He’s Catholic and Catholics worship Mary.”

For some reason, I wanted to find out more.  So I kept reading the Catechism.  I found myself agreeing with what I read.  It made sense to me.  Even when I hit the sections on Mary.

Since the month of May is dedicated to the Blessed Virgin in the Catholic Church, I thought I’d take a few minutes to explain some of what I’ve learned about her.

Catholics believe Mary was ever virgin.

Saint Augustine says she “remained a virgin in conceiving her son, a virgin in giving birth to him, a virgin in carrying him, a virgin in nursing him at her breast, always a virgin.”  The Compendium of the Catechism explains that “when the Gospels speak of the ‘brothers and sisters of Jesus,’ they are talking about the close relations of Jesus.”  The doctrine of her perpetual virginity appeared very early in the Church, so I’m willing to accept the witness of the early church fathers and the teachings of the Church.

Catholics believe Mary is our mother too.

The Compendium also says that in Jesus, Mary’s “spiritual motherhood extended to all whom he came to save… [she is] the true mother of all the living, who with a mother’s love cooperates in their birth and their formation in the order of grace.  Virgin and Mother, Mary is the figure of the Church, its most perfect realization.”  Thus I honour her not only as Jesus’ mother, but as my mother as well. We ask Mary to pray for us, just as I’ve often asked other friends to pray for me.  We believe she (and the saints) can hear our requests and intercede for us to Christ.  Yes, I can pray to Christ myself, but sometimes it’s nice to know that others are praying for me.  I found this particularly true during my pregnancies, when I realized that Mary, in carrying Jesus in her womb and raising him, knew what I was going through as a mom.

Catholics believe Mary was assumed bodily into heaven at the end of her earthly life.

At first, I didn’t like this idea because it seemed to make Mary equal with Jesus.  However, while Jesus ascended into heaven (His action), his mother was taken up into heaven (also Jesus’ action).  Also, the Old Testament has other examples of men who were taken into heaven as a sign of God’s favour—Enoch was said to “walk with God” and Elijah rode up to heaven in a chariot of fire.  There’s also a long tradition of respect for saint’s relics, but no one has ever claimed to have Mary’s body (there’s probably a reason God took her into heaven).

Mary is the perfect example of a Christian.

Most of all, I look to Jesus’ mother as the perfect example of what a Christian should be.  She was the first one to say “yes” to Jesus, to give herself totally to him.  She was there at his birth and there at his death.  She continually points us to him.  Even in the rosary, as we ask Mary to pray for us, we reflect upon the mysteries of Jesus’ life, death and resurrection.  Mary is thus honoured in the Church because she is our example, our intercessor, our mother.

Two excellent books on this topic are Scott Hahn’s book Hail, Holy Queen (affiliate link) and Mary—A Catholic-Evangelical Debate by Dwight Longenecker and David Gustafson.  For moms, Catherine Hickem has written a devotional-style book from a Protestant perspective called Heaven in Her Arms.