At the beginning of April, when my mother-in-law, sister-in-law, and two nieces came to visit for spring break, we took them to the Victoria Bug Zoo for a rainy afternoon.  We’d heard good things about the Bug Zoo but hadn’t made it there for a visit yet.  Located right off the harbour in downtown Victoria, the Bug Zoo has a gift shop and a large room full of bugs in plexiglass boxes. 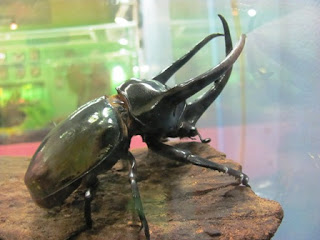 When we arrived, a tour was in progress—a large group clustered around a man who took each bug (except for a couple) out of its cage to show it around.  He described the bugs and let visitors hold most of them (if they wanted—I didn’t hold any).

For most of the time, I wandered about the room with Sunshine and Lily, who were a bit less interested in the explanations about the bugs.  The size of the group made it hard to join in on the tour, but I caught tidbits of information about some of the bugs.

One of the parts of the Zoo that I found fascinating was the huge ant colony.  On one wall, about a dozen plexiglass boxes (roughly a foot square) were connected by clear plastic tubing.  The ants ran along the tubing, gathering leaves from one box and carting it along to other boxes, where they built nests or did whatever ants do.  It was interesting to peer into each box and see hundreds of ants, busily running.  I wondered how long it would take one ant to make it from one end of the colony to the other, or if ants just stayed in their own small section of colony. 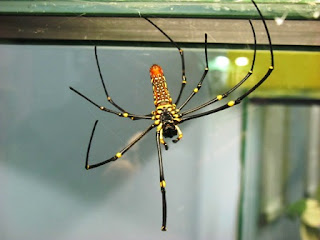 I was awed by the variety of bugs and what they all do… from huge, icky cockroaches to long, shiny millipedes to stony, spiky horned beetles to slender, fragile stick bugs and oddly-shaped leaf bugs… God truly has a wild imagination!  At the same time, I’m glad that I won’t meet most of these bugs in my day-to-day life, but only on the other side of a plastic wall in a zoo.

This would be a great field trip for a science trip, particularly if the kids are doing a unit on bugs or the environment.  There’s a lot of bugs packed into a small space here.

Baby Friendly: The bug zoo is located in a pretty small space and strollers are not allowed in the exhibit area.

Kid-friendly: Most of the bugs were located in cases that a child could easily look into. I had to hold the girls up for a few of the cages. They did try to hold some of the bugs.

Cost: a family of four would cost about $35-40. Admission is a bit pricey here, as they charge for kids 3+ (it was one of the first places where we had to pay for Sunshine).

For more information about visiting the Bug Zoo, drop by their website.