Sunshine turned three this week. At times, it feels like the years since her birth have flown past and I wonder how I ended up with this quirky, cute little girl. Other times, those three years seem like forever—so much has changed, other than Sunshine growing up a bit more (goodbye terrible twos!).

Everyone knows the cliche about the “terrible twos” and in some ways, it’s true. Sunshine has learned to communicate more during the last year. With that has come frustrations when she can’t communicate—or when Mommy and Daddy don’t understand what she’s trying to communicate.

She’s learned to push boundaries, to see what we’ll let her get away with. And sometimes, since howling gets her little sister attention, she tries to howl just to get attention for herself. When we were looking for babysitters in the fall, several potential sitters expressed concern about how young Lily was. I thought, “Oh, she’s the easy one—she doesn’t talk back yet!”

At the same time, there’s nothing terrible about this time. In fact, I’ve been really enjoying the toddler years. When she was younger, different moms would tell me (at different times), “Oh, I love this age—it’s so much fun.” I’ve decided that all ages and stages are fun, just different. Sunshine might whine more than I like, but she sleeps through the night.  She might not do what I ask her to do right away, but I can ask her to help put toys away or sort socks or set the table.

In the summer, I took Sunshine over to her cousins’ to play on their playground. She climbed up by herself and started down the slide. Because I was holding Lily, I couldn’t catch her, and she landed on her bum at the bottom. She stood up and started towards the swings, but then the pain set in and she began rubbing her bum and whining.

She’s gotten better at doing things by herself, such as climbing into her car seat in the Jeep or booster chair at the table. However, she’s still learning how to tell us this. If we offer to help her, she answers, “I do it my cell phone.”

We stopped at a dollar store one afternoon to get Sunshine a few toys. As we stood at the cash register, the cashier leaned over to comment on how cute Lily was in her car seat. Sunshine said, “That’s Lily,” and then, as the cashier continued to coo over Lily, she added sternly, “Leave alone.”

After we did a day hike, I took Sunshine to the outhouse to go potty. As I latched the door, she glanced around the small, stinky space and commented, “No soap.”

I was folding laundry on our bed, with Lily playing on the other side of the stack of laundry, when Sunshine saw something as she ran past. Stopping, she stroked a neatly folded set of flannel pajamas and exclaimed, “You found—you washed my sheep jammies!”

She looked up at me, very hopeful. “Can I put them away?”

I laughed. “Yes, you can,” I said, picturing the jammies ending up in a pile on her bedroom floor.

I took a stack of Lily’s clothes to their room. The jammies and pants were sitting in the right drawers, but Sunshine dropped her shirts on her bed, saying, “I put them up here.”

“No,” she said, shaking her head. “They sleeping.”

Later, as I was making our bed after mending and washing the sheets:

“No, Mommy’s making the bed. You need to stay off.”

“I wanna wear that!” Sunshine announced, trying on the bracelet I’d left on my night table.

“No, that’s Mommy’s.” I rescued it and put it on my bureau instead.

“I wanna read a book!” Sunshine picked up my copy of My Utmost for His Highest and began flipping the pages, as if she were speed-reading like her Daddy.

“A pillow-sheet!” she announced when she saw me stuffing the pillows into their cases.

As soon as I had the bed made, she said, “I wanna sit on it,” and got up, sprawling on her back on my pillow while still reading the book. Soon, she rolled onto her side and said, “aw-schnoo,” then looked at me and said, “I say ‘aw-schnoo’ like Daddy.”

Small Moments that Make Me Smile

While there have been a few instances of the terrible twos, there are also many things that make me smile and thank God for my daughter. Some of these moments are simple, such as seeing a small pair of shoes laying by themselves after she’s has gone to bed, and thinking about all that those shoes have done.

Other moments are funnier. Sunshine’s grandparents visited us for her third birthday and she lined up all of our shoes before we went out: 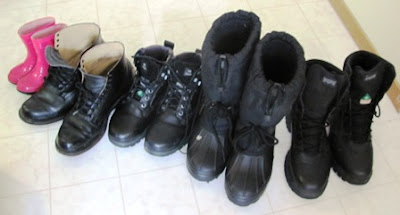 I put one of Sunshine’s paintings on the fridge to dry, and she decided to decorate it a bit more by putting her LeapFrog letters around it: 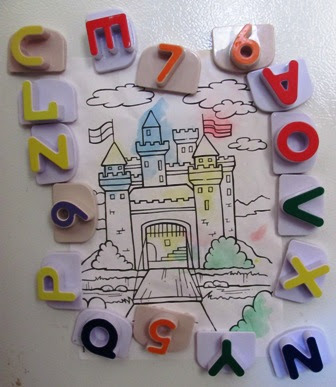 And then there was the day I was picking up toys in the evening, after the girls had been playing with their Little People all afternoon, and found this: 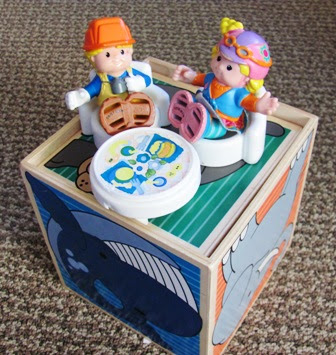 These are the moments I tell myself to cherish and remember, because someday, when she’s long past the terrible twos, I won’t find little shoes laying around on the floor or Little People picnicking on stacking boxes. Sunshine won’t find it fun to line up boots together anymore or to paint pictures for the fridge. And so, like Mary, I try to hide these moments in my heart (and on my camera).

For her third birthday, my husband and I decided to get her a little kitchen set (affiliate link). We’ve shopped around a bit, comparing features of different kitchens and watching for a sale. On her birthday, we borrowed her grandparents’ van to go get the kitchen (there are some disadvantages to driving a Jeep TJ).

However, we stopped at three places to do some last-minute comparisons. By the time we decided which kitchen we wanted, Sunshine was wailing. We’d promised her a kitchen but we kept leaving the store without it. I don’t think she believed all my promises that we were going to buy the kitchen until she actually pushed the big box up to the counter and watched me pay for it.

We’ve enjoyed watching her delight in playing with it since (even if she’s frying “chocolate-covered bagels” for “supper.”). So now we have a three-year-old in the house… who just got used to being two and now says “I wanna be two!” when she tell her she’s three.