Besides unpacking and meeting the neighbors, we’ve also been exploring the city a bit. On Wednesday, after I got overwhelmed by trying to sort out the girls’ clothes (what fits who and who’ll be growing into what soon), we went to Beacon Hill Park for the afternoon. 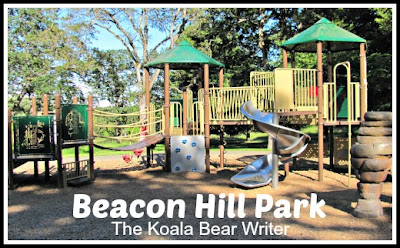 Finding the Victoria map book that my aunt gave us has made getting around the city much easier, but my husband seems to be mastering directions and streets here better than I am. This is the first time we’ve moved to a new city and I sometimes find myself wishing we were back in one of last two small towns we lived in, with only one main street that took half a day to explore.  I’m starting to grasp the main drags and Beacon Hill Park was off a main drag. We took the scenic ocean-view route there, with Sunshine exclaiming, “I see a boat, Mommy! I wanna go a beach, Mommy! There’s water, Mommy!”

At Beacon Hill Park, we stopped first at the Children’s Farm (a petting zoo). Sunshine ran from pen to pen, looking at the ducks, pigs, and horses. She enjoyed the bunnies and guinea pigs as well, but was a bit shy around the goats, to my surprise. She tentatively brushed them but didn’t want to pet them, and when a baby goat climbed up on the rocks with her, she wasn’t very happy. One baby goat was climbing on people as well, and went jumping over me when I bent down to help Sunshine with her sweater.

The suggested donation for the children’s farm (not listed anywhere in Frommer’s or on the website) was $3 for adults and $2 for children. We got there right before it closed, so we didn’t pay. Half an hour was about enough time to spend in the park and I didn’t think it was worth $8 (maybe $4). Perhaps if that was the only place that Sunshine could see animals, I’d want to take her more, but she’s already met lots of cows and dogs and other critters.

From there, we drove around the park several times trying to see what else was there. The view from the top of the hill, out over the ocean with the mountains in blue haze on the other side, was very nice. We missed the splash park the first three or four times we drove past it, because it wasn’t turned on; it’s a huge watering can that squirts water in various directions. We stopped at the playground and let Sunshine play for quite a while, then went walking around the trails. We’ve started taking the girls on hikes lately, so the trails through the park were a good chance to go for a longer walk. Sunshine enjoyed tramping along the trails and Lily was quite happy as well, looking around at all the trees and flowers. I found it fascinating how the terrain went from carefully manicured lawns and gardens to native island rock and grass sticking up. We saw two blue herons in one of the lakes, as well as all the ducks who came paddling over looking for handouts (despite the signs about not feeding them).

The history of the area fascinated me. The original bandstand has been relocated in the park and now has several posters with information and pictures about the park history. Apparently it has been there since 1850, when the chief Hudson’s Bay Company man allocated it as a park. It was given to the city in 1882 and was a very popular place because it reminded the city’s inhabitants of their native England. Now, there’s a good collection of native trees and plants, but for a while, most of the plans for the park seemed intent on making it a good English park.

One further note about the park: it’s very popular with cyclists and joggers, so watch for them when driving through the park. We may be back with our own bikes or to explore more of the trails there with the girls.