I enjoy reading historical and Biblical fiction, so I was thrilled to review The Heart Changer from Jarm Del Boccio, Author. This middle grade historical novel tells the story of Miriam, an Israelite girl taken captive by the Syrians. Living in a foreign land, Miriam has a choice between becoming bitter and angry about what has happened, or opening her heart to how God can use her in her new circumstances. The Heart Changer caught my attention because it brings alive the life of a minor character in a small Bible story. Naaman’s wife and her handmaid aren’t even named in the Bible. Yet Naaman’s miraculous healing would have never happened without the small suggestion from Miriam. This is a powerful story not only about faith, but also about how God can use each one of us in amazing ways.

The story opens with the Syrians charging into Miriam’s hometown. She’s snatched by a soldier and carted off to the Syrian army’s camp. Here, she catches the eye of the commander, who has been looking for a new servant girl for his wife. Miriam endures the march through the desert to Damascus, where she becomes part of Naaman’s household.

Over the next weeks, Miriam must adapt to her new role as a servant. She shares a room with Rana, whose role she has taken over. Rana is mad about her demotion and takes her anger out on Miriam, trying to make Miriam fail in her new role. Drawn to Adara’s gentle ways, Miriam strives to serve both her new mistress and her God. Worry for her family, whose fate she doesn’t know, and difficulties in her new life cause her to question when Jehovah even cares what happens to her.

When Miriam overhears a conversation between Naaman and Adara, she has the chance to make a difference in her new home. She tells Adara about Elisha, the prophet in her hometown. The trip back to seek healing for Naaman’s leprosy also lets Miriam find out what has happened to her family.

My thoughts on The Heart Changer

Jarm Del Boccio does a great job of describing what Israel and Syria would have been like in the time of the prophet Elisha. I loved her descriptions of the food, clothing, and place in which Miriam finds herself. This is what I love about reading Biblical fiction—learning more about the backstory, culture, and everything else that was going on around the brief story told in the Bible.

Miriam’s struggle between bitterness and acceptance is also very real. She has grown up with her parents’ faith, yet now her faith is put to the test. Miriam must either make it her own, and trust completely in Jehovah even though she is far from home, or succumb to the anger that creeps up in her heart. At the beginning of The Heart Changer, Miriam has a friend who helps encourage her towards trust in God. However, I would have liked to see the plot move a bit more slowly. I wanted to see Miriam at home with her family, in a normal day, before the Syrians come crashing down. To understand Miriam’s grief and anger at leaving, I wanted to know what she was leaving. Her parents and younger brother appear in the novel only in her memories.

I would have also liked to have Elisha’s name woven through the story much sooner. He suddenly comes to Miriam’s mind after Naaman’s leprosy is mentioned. It seems like a convenient plot twist. If Elisha really lived in Miriam’s hometown, I would have loved to have her think about his teaching or his miracles while she was struggling with her faith, so that mentioning his name to Naaman seems more natural.

Of course, with a writing degree and years spent studying how to write novels, I’m a rather harsh critic. The Heart Changer is a debut novel written for middle school children. Most girls would identify with Miriam’s struggles and not notice the plot points that annoyed me.

“The Heart Changer is a touching tale of loss, faith, and healing. Jarm Del Boccio spins together vivid details that bring Miriam’s world to life. Her story is sure to capture readers’ hearts.” ~ Carmela A. Martino, author of the award-winning novel Playing by Heart

Check out the CREW reviews to see what other homeschoolers thought of The Heart Changer. 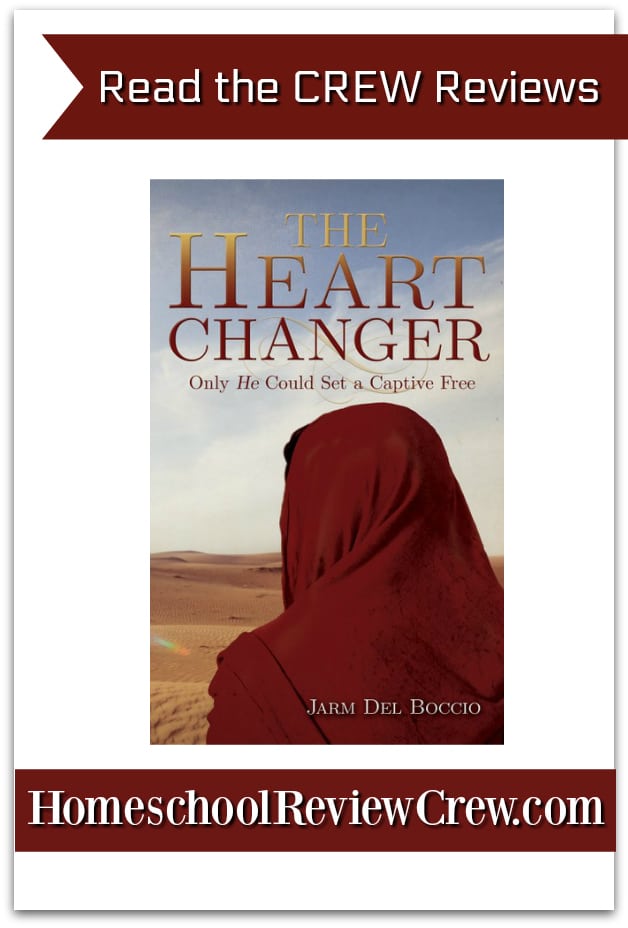 The Heart Changer is available for purchase via Ambassador International, Amazon, or your favourite online bookstore.

If you’re looking for an inspirational read to add to your daughter’s summer book list, The Heart Changer is a great idea. Girls will be drawn into Miriam’s story and grow in their faith along with her. If your daughter has recently gone through a rough time (maybe a big move or the loss of a loved one), she may identify with Miriam’s struggles and learn to turn to God as Miriam did.

Jarm (pronounced “yarm”) Del Boccio finds her inspiration for writing in everyday life, but in particular, when she travels, observing  quirky things that happen along the way. Focusing on lives of characters from the past, she is devoted to breathing new life into the pages of history. The Heart Changer is her debut novel.

Jarm has a background in elementary and high school education, and served for seven years as a school librarian. She taught three missionary kids in an isolated area of Papua New Guinea. Jarm lives with her husband, daughter and son (when he lands at home) in a tree-lined suburb of Chicago. Her daughter was the inspiration for her main character and plays the role of Miriam in Jarm’s book trailer.

Do you enjoy reading Biblical fiction?