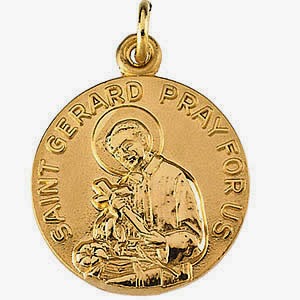 I first discovered Saint Gerard Majella when I was pregnant with Jade, as I wondered what saints I could ask for intercession during my pregnancy.  It surprised me that a male saint would be a patron saint of pregnancy. Somehow I expected a woman would be better able to pray for me through this experience that only women have.

Then I read his story and put a Happy Saints image of St. Gerard along with a prayer to him in my room, where I laboured and gave birth to Jade two years ago today.

St. Gerard’s patronage of pregnant women comes from a story in which Gerard dropped a handkerchief while visiting friends.  One of the daughters noticed this and ran to return it to him, but he told her to keep it.

Years later, when she was in childbirth and it was not going well, she remembered this handkerchief and requested her family to get it for her.  Immediately her pain went away and the child was born healthy.  Word of this spread quickly and other mothers began asking for Gerard’s intercession during their pregnancies and labours.

Gerard Majella was born in Italy in 1726, the fourth child of a tailor and his wife.  His father died when he was young, so Gerard had to leave school at age 12 to work to support his family—first as a tailor and then as a servant.  He tried multiple times to join a religious order, but was refused because he looked sickly.  He persisted and was finally accepted into the new Redemptorist order.  He was so excited to be a lay brother that he did even the most menial tasks with great joy.

Gerard loved spending time before the Blessed Sacrament, but also experienced depression and doubts about his faith.  He often visited the sick and his prayers were known to bring about miracles.

Then, when Gerard was 27, he was accused of sleeping with a young woman.  The Redemptorist superior knew that Gerard had a good reputation as a prayerful, helpful young man, but he prohibited Gerard from any contact with the outside world.  Several months later, the accuser repented and admitted that she had lied about Gerard.

Today, he is a popular saint for mothers or those trying to become mothers.  One mom, who prayed to Saint Gerard Majella when doctors told her she wouldn’t have any children, founded a website dedicated to him which also contains a novena and several prayers. 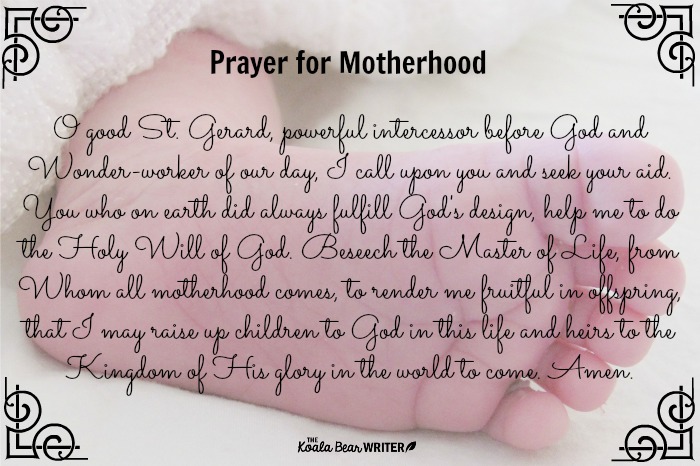 Do you like this prayer card? Subscribe to my email newsletter for more prayer cards (or to download this one in a larger size!). This PDF set includes three prayers to St. Gerard and one prayer to St. Anne (Mary’s mother), in both prayer card / poster format and greeting card format. Send a card to a friend who is expecting to encourage her!