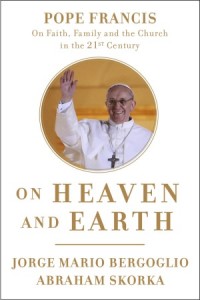 Shortly after the cardinals went into conclave this spring to elect a new pope, I went into labour.  When we finally came out of new baby daze to look at the world after Jade’s birth, we found out we had a new pope: Francis, formerly Cardinal Jorge Mario Bergoglio of Brazil.  Thus for us, Jade’s birth and Pope Francis’ election are connected.  When I saw a book by the pope, I thought it would be a great way to get to know more about our new spiritual leader.

On Heaven and Earth: Pope Francis on Faith, Family and the Church in the Twenty-first Century was actually written before Pope Francis was Pope Francis.  Originally published in 2010 in Argentina, On Heaven and Earth is a conversation between Pope Francis and Rabbi Abraham Skorka.  Both men have worked to establish inter-religious dialogue in South America and this book is a unique view of that dialogue and their faiths.

In the first few chapters, I found the back-and-forth between two authors or narrators annoying.  I wanted to get to know Pope Francis, not Rabbi Skorka.  As I got further into the book, however, I found the dialogue more interesting.  Instead of looking at this as just a Catholic book, I saw it as a way to learn more not only about Catholicism but also about Judaism.  Pope Francis and Skorka provide an interesting and readable comparison of two of today’s oldest religions.

The two men begin the book with big questions like “On God” and “On the Devil” and then move through “Prayer” and “Religious Leaders” to topics of concern in today’s society such as “Euthanasia,” “Abortion,” and “Divorce.”  Each demonstrated profound respect for the other, showing how we can agree and disagree on various matters.  I found myself making bookmarks in several places on my Kobo as various portions stood out to me in addressing issues that I’ve seen or heard of lately.

For example, Pope Francis says, “Religion has a right to give an opinion as long as it is in service to the people.  If someone asks my advice, I have the right to give it to them.  The religious minister, at times, draws attention to certain points of private or public life because he is the parishioners’ guide.  However, he does not have the right to force anything on anyone’s private life.  If God, in creation, ran the risk of making us free, who am I to get involved?”

Later, on the topic of women and ordination, he adds that “… in Christianity the High Priest is Jesus, a male.  In the theologically grounded tradition the priesthood passes through man.  The woman has another function in Christianity, reflected in the figure of Mary.  It is the figure that embraces society, the figure that contains it, the mother of the community.  The woman has the gift of maternity, of tenderness; if all these riches are not integrated, a religious community not only transforms in a chauvinist society, but also into one that is austere, hard, and hardly sacred.  The fact that a woman cannot exercise the priesthood does not make her less than the male.”

If you are curious about either Catholicism or Judaism (or both), I recommend On Heaven and Earth.  This book does provide a glimpse into the views and beliefs of our new pope and makes me excited for what he will accomplish during his papacy.

I’m linking up with Essential Fridays this week.