I love chatting with authors after I’ve read their books and finding out more about the person who created the fiction I enjoyed so much.  It’s also a pleasure to find out things we have in common (like English degrees or a voracious appetite for reading).  So I bring you a short interview with Ginger Moran, author of The Algebra of Snow.

Ginger: I’m a reader from age four on. I think that may be one of the most reliable predictors of who is going to be a writer. I wrote some things with my great-aunt, who was a school principal, and then completely forgot about doing that until I was in my late 20s and having a general psychological, spiritual, vocational crisis and my therapist thought maybe writing would be a good outlet. I had two degrees in English by then, but it really hadn’t occurred to me that I might want to write as well as to read.

I still have “Sammy the Squirrel,” the book I wrote with my Great-aunt Sarepta. She bound it with hem tape, which is something elderly women had on hand in those days, and I treasure her knowing me so well as a child. That is rare—someone knowing you. 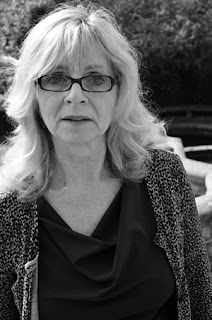 I had the usual slings and arrows of life—a family that looked great on the outside and qualified in many ways as Southern Gothic on the inside, being a flower child, disowned by my father for being one, expatriating myself to Switzerland and then finding out that I really liked living in America, calling off a wedding one month before it was going to happen, finishing my degree as a nontraditional student at a very traditional school.

Eventually, I started writing, took an easy workshop, then tried getting into a hard one with Ann Beattie and astonishing myself that I did get in. She was very hard and very helpful. When I was having dinner with her once, complaining about the full-time job I’d taken writing catalog copy after I finished my Master’s degree, she suggested in her very dry, Ann Beattie way, that I should think about doing a Ph.D. at the University of Houston—“It’s not as bad as you imagine.”

I did, it wasn’t (though it was way worse in many ways, which I enumerate in the novel I’m just finishing, How Death Comes Between Us), and I’ve been writing steadily ever since. Three novels, one collection of essays, and a nonfiction book, so far.

Ginger: I’m inspired by other people’s inspiration. I love reading. I mean love it. There isn’t anything that makes me happier, unless maybe it is watching a really gripping movie or listening to great live music. All of these things inspire me, make me glad I’m alive, make me alive, even.

And what really gets me going is writing my own great sentence. That might seem arrogant or self-congratulatory, but I don’t think I’m alone in feeling that, when a sentence absolutely takes off, soars into the heavens, that it isn’t really me writing it—I’m riding a wild an wonderful current. Fiction for me—whether written, dramatized, or sung—is just like John Barth once said, “Fiction maybe—but truer than fact”—more alive than life, a way of being alive.

Ginger: I think every so often there is an artist who transcends the limitations of what it ordinarily means to be human, who gets it so right that they aren’t themselves anymore but are reaching into a wider, deeper flow than most of us ever can know. Chaucer is one of these, Shakespeare another. In the present day, I think Bruce Springsteen goes there.

These people disappear as themselves, going beyond what Virginia Woolf calls the “cramp and confinement of personality.” They give us the awesomeness of life—the terrible and the wonderful, the frailties and the triumphs—in ways that are so pure it blows me away.

I also have to confess to a deep and abiding love of mystery novels. I love Dorothy L. Sayers, Elizabeth Peters, and James Lee Burke more than they will ever know. And if I want a real tonic, a real sense of smart, I read Miss Marple or watch the Joan Hickson versions of the movies. My characters are always working on a mystery. In The Algebra of Snow, Amelia is solving for the n of her mother’s death when she was young. She goes deeper and deeper into the effect of this on her life, the harm and the release of it.

In my second novel, The Body of Summer, the main character is literally working on a mystery. She is an English professor at the University of Virginia whose ex-husband is accused of killing a graduate student in her department. That was my only mystery—I love reading them, but I’m not a good plotter and found it was too much work.

I wrote a thriller next, How Death Comes Between Us, whose main character is a graphic artist and guerrilla environmentalist who goes to work for an oil company in Houston, leaving her husband and young son in behind in Virginia. She’s trying to figure out why she did that and runs into a big batch of intrigue at the oil company while she’s at it.

Donald Barthelme was one of my teachers at the University of Houston. He used to always ask us what the problem was in a story. It was a very annoying question at the time—it turns out to be the crucial one to any sort of successful writing, in my opinion. There has to be a problem.

So I’m inspired by writers who take on problems, wrestle with them honestly, tap into the larger consciousness. I aspire to this in my writing—to dive so deep into the individual that you come out in the world.

Has someone encouraged you to pursue your dreams as Ginger’s great-aunt and mentor encouraged her?  What books do you enjoy reading?