Yesterday, we ventured off the island and into the big city of Vancouver.  I don’t think I’ve ever stopped there before; I’ve always been travelling through the city on my way to somewhere else.  Just that short visit made my husband and I both glad that we didn’t choose to move there last year.

The day started out somewhat of a disaster.  Lily wanted to nurse just when the alarm clock went off.  Then we got everyone packed up and out the door, only to get to the ferry and find out it was full.  We watched them load the last cars on and wished we’d been about 15 cars further up the line.

So Lily and my husband napped while Sunshine played in the park until the next ferry arrived.  Then, when we finally reached Vancouver, the drive that took 40 minutes on Google maps took an hour in real life. 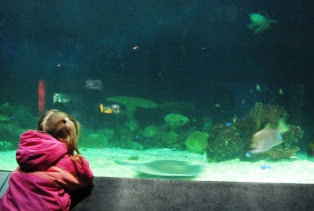 After dropping my husband off, I made my way to the Vancouver Aquarium with the girls.  Because of the ferry delay and the traffic, we only had a couple hours to wander around there, rather than most of the day as we’d planned.

While I enjoyed watching all the marine life, it was stressful doing so by myself—Lily didn’t want to ride the stroller and Sunshine dashed from exhibit to exhibit.  We enjoyed watching the sea otter and belugas and several of the fish aquariums, and even caught part of the dolphin show (from behind other spectators).

One thing I noticed at the aquarium was the conservation theme.  The dolphins were doing tricks for treats because they’d gotten stuck in fishing nets and been rescued.  The frogs were suffering from pesticides, pollution, and people’s garbage.  And the belugas were having troubles in the Arctic because of huge climate changes up there.  It was neat to see all the birds, fish, and animals, but also sad to think that our lifestyle is hurting theirs.

Then it was back to pick up my husband, which was easy… until there was no parking by Chapters and I had to go around the block which turned into going around ten blocks because of the one-way streets and seemed to take forever because of bumper-to-bumper rush-hour traffic and the thousands of pedestrians at every corner.  When we did make it back to Chapters, he was waiting for us and jumped in the Jeep with books for girls and a Frappucino for me (goodbye, stress!).  We toured quickly through Granville Island, then headed for the ferry… or so we thought.

When we went over a bridge we didn’t recognize, we realized we were going the wrong way and stopped to look at the map, then turned around and drove back the other way.  Now we were watching the clock again, anticipating another two-hour wait because we just missed the ferry.

This time, we were in luck—we got to the terminal and drove straight onto the ferry, the second last car to get loaded up.  We had supper on board (despite the disappointment that, the time we wanted to try the buffet, we were on a boat without a buffet), watched Sunshine and Lily play in the kids’ area, and then arrived safely back at home, glad to see a familiar city once again.