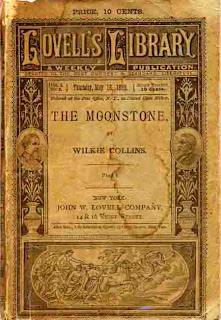 Wilkie Collins’ novel The Moonstone is a detective story about a jewel, originally looted from a shrine in India, which disappears after being given to Rachel for her birthday.

One reviewer called The Moonstone the “precursor” of the English detective novel, complete with a smart, analytical detective in the person of Sergeant Cuff, and lots of suspense as suspicion falls on nearly everyone involved and the story takes several twists and turns before finally revealing what happened.

What I found most intriguing about the novel was Collins’ use of several first person narrators. The story is told directly from the perspective of the people involved in the mystery, complete with their unique opinions, viewpoints, and ideas regarding everything going on. Collins’ characterization and psychological insight are brilliant.

The first narrator is Betteredge, the household steward, who holds that we should be “superior to reason” and that a pipe and Robinson Crusoe are good for whatever bothers you. We then pass into the hands of Miss Crabb, a pious spinster who belongs to the Mothers-Small-Clothes-Conversion-Society and hands out tracts and religious books to everyone and anyone. Franklin Blake is narrating the story when the suspicion of stealing the diamond falls on him, causing greater confusion over the “whodunit” since, being inside Franklin’s head, we believe his professions of innocence and are as confused as he is about the theft. Other people involved in the story provide long or short passages relating to the diamond, each in their own style, from lawyer Bruff’s matter-of-fact report to doctor Ezra’s opium-influenced ramblings.

Wilkie Collins was born in 1824 and lived only sixty-five years.  He wrote thirty novels, more than sixty short stories, at least fourteen plays, and more than one hundred nonfiction pieces.  His most popular novels today are The Moonstone and The Woman in White (also an excellent novel).  For more about Wilkie, see his biography.