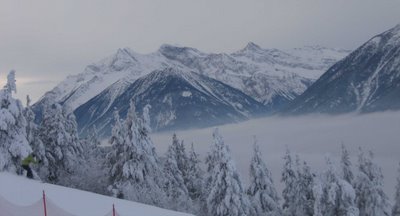 I spent last weekend skiing in Panorama. We hit the slopes at 9:00 on Saturday morning, and my fiancé and I were the last ones to hobble off at 4:00 in the afternoon. It was opening weekend there, so not all of the runs were open, but the snow was good. The weather was also great; only -3*C and sunny above the fog.

My uncle and brother accompanied us down the lower slopes for the first run and then headed for higher, steeper slopes. My aunt, mom, fiancé and I stayed on the green slopes at the bottom, warming up more slowly. Then my uncle appeared to say that the top was great and we should go up. In our enthusiasm, we didn’t pause to think about that, but hopped on the chair and headed up.

The valley had been fogged in all morning, so we couldn’t see the surrounding mountains. As we rode the chair, we disappeared into the world of grey fog, and then emerged on top of the fog to a view of snow-covered mountains shining in the morning sun. The fog sat below us like a pillow in the valley, hiding the skiers, the village, and the bottom of the hill.

My fiance watched the hill pass under the chair below us, wondering if it wasn’t a bit steeper than we were ready for. I blithely assured him it was fine and we would make it down. He kept saying it looked steep.At the top, we discovered that there was only one way down.

We started out, and made it down the first stretch before realizing that perhaps he was right—it was a bit steep. My fiancé was out for only the third time on his snowboard and only the first time in the mountains, so he was learning very quickly. I had been to Panorama once the year before, so I knew the hill a little bit, but still found it challenged me. 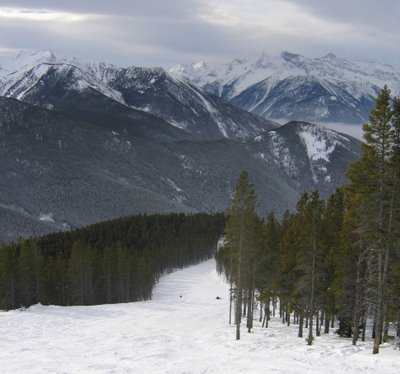 We progressed slowly, cutting back and forth across the hill and taking frequent breaks. I retrieved his hat for him after the spills. My mom and aunt chatted merrily together as they waited for us to get down. Finally, we reached the bottom again and went in for lunch.

After lunch, I went up with my uncle and brother. I wanted to see the very top of the mountain, and I knew I would have to do it early in the day, before I got too tired to get down safely. My uncle had taken to calling my brother “Boy Wonder” and “Kamikaze Kid,” but he had the skill to chase my brother down the hill. I didn’t, and wondered for brief moments if I wasn’t crazy to be chasing them up there. However, I knew there was an easy route down – as long as it wasn’t in bad shape – and I desperately wanted to go all the way up, just once.

We popped out of the fog again, transferred lifts, and reached the very top of the hill. Far to the west was View of a Thousand Peaks, and though my uncle suggested it, we didn’t stop to see if there actually was a thousand peaks there. He and I headed down the cat track from the top, known as “Getmedown”—the easy route down for those skiers like me who don’t want to risk their necks on the other black diamond and double black diamond trails off the top.

My brother disappeared. I alternated between staring at the mountains and making sure I didn’t fall over the edge of the trail. Coming around one corner, I looked up in time to see Boy Wonder drop off a four-foot ledge onto the trail in front of my uncle. He was headed straight down the mountain.

My uncle and I continued down the trail, and reached the top of the chair lift, where there was no sign of the Kamikaze Kid. After looking around for a minute, we figured he’d gone to the other chair, and so we skied over there, in time to catch him coming down. We went back up again. My uncle decided to follow my brother down the black diamond run, and I took pictures of them going down, then continued on my merry way. “Getmedown” ended and I skied onto the blue trail I had been on earlier with my fiance, which felt much steeper now that I was more tired. I kept telling myself I couldn’t wipe out, as there was no one with me to retrieve my hat.

Reaching the bottom, I managed to hook up with my other ski partners. The hills were starting to wear, as all the skiers pushed the snow into piles of powder or bare spots of ice. Despite the warm weather, we began to get a bit chilly. The chair lifts got extremely comfortable, and it was harder to get the muscles moving at the top of each run. My mom and aunt headed back to the condo. My fiancé and I took one more run down the hill—stiff and sore and cold—and then also retreated to the condo, where there was a fire, hot chocolate, and soft couches.